Mission: Take Back My House - Part I

It's important that you understand this so the following doesn't come off as some kind of excuse.  I'm not trying to say any of this is actually responsible for my messy house.  Only that when you combine two messy people who collect and treasure clutter and then add other challenges to that mix, well, you end up with my house.

And when I say other challenges I think we all know who I am talking about.

But I am not going to cower in fear any more.

It's time to take a stand.

For the time being, the water is staying where it belongs, you know, in the pipes.  That is, aside from the bathtub leak.  But we have fixed that problem by not using that bathtub.

The furniture is staying where it belongs along with clutter keeping to it's designated spaces.

So, I have decided to reclaim my house.

A long long time ago, before the first attack, I had plans.  I had ideas.  Things were happening.  I was painting trim and horrible brown posts.  I was arranging furniture in certain ways.  I was getting creative with what I had.  Heck, I was even scrapbooking!

Then came the Gremlins.  There's just something about having all your living room furniture stuffed into your dining room that suddenly takes the focus off the little bit of trim that didn't get finished.  You know, when you were interrupted by your son making a mad rush to the bathroom, only to return and find the curtains had been painted by your daughter.

Somehow that just fell to the background.

And let's be honest.  I gave up.  I just didn't care anymore.  Really, what was the point of finishing the trim?  Nobody would ever notice anyway because no one would ever be invited over to a house they could barely walk through.  Even if they did there were plenty of distractions.  "Why is your daughter's dresser in your dining room?" would probably be asked before, "Why is there a strip of green painters tape under that trim?"  And so that tape stayed there for well over a year.

Not to mention the fact that, when you have just spent thousands of dollars on fixing water leaks, that $20 curtain rod becomes a bit of a strain on your budget.

Finally I am giving up on giving up.  I've had enough of living my life according to the rule of the Pipe Gremlins.  Which pretty much says, "If you attempt to improve your home in any way, we will create another disaster to derail you."

I'm taking the risk.  Tempting fate.  Risking the wrath of the Pipe Gremlins.


It all started with the living room curtains.

There is just something about completing one project that makes everything else stand out.  When you have a set of great looking curtains the trim above them suddenly becomes more noticeable. 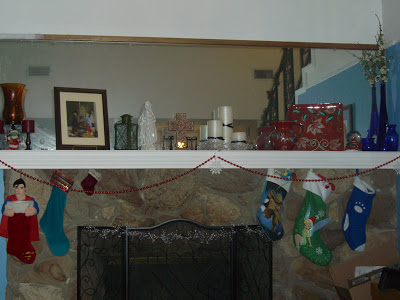 So, I painted it. 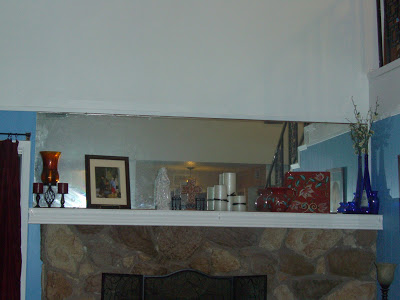 Of course the curtains in the living room looked so nice that the ones in the dining room started looking shabby.  So I started searching for curtains like the ones I have in the living room.  For some reason, 5 years after buying the first set, Target doesn't seem to have any that are an exact match.

I was also reminded how expensive curtains can be. 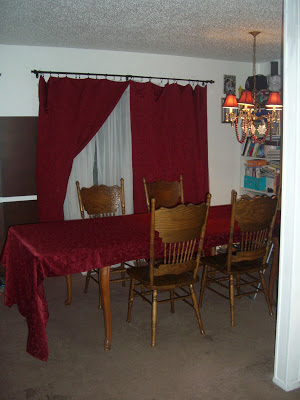 Notice how well the curtains match my table cloth?

I was hosting January book-club so I cleaned the entire house.

To be fair, I should probably mention that it was mostly already still cleanish from the great annual Christmas cleanup.

And when I say entire house, I mean anywhere that can be seen by someone walking through the front door and staying in the main area of the house.  Plus the bathroom. 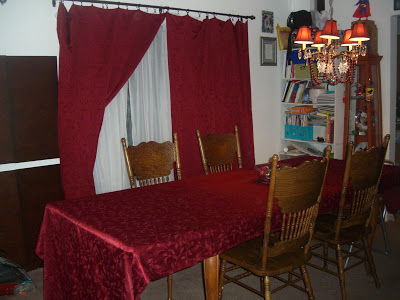 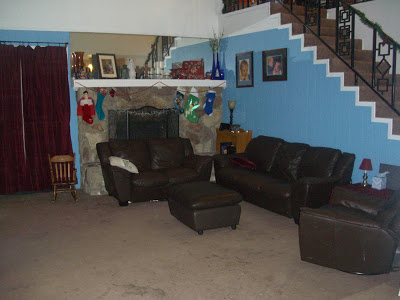 As you can see, the kitchen did not make the cut. I'll get to that one of these days...

While I was cleaning house, I decided I was tired of the tiny shelf in my entry way that was nothing but a clutter trap, so I found something that not only fit the space better but is a bit more functional.  It was on sale at Target and I had a gift card from Christmas.

Then, since I was already in the painting spirit, and the entryway was already looking that much better, I decided to finally paint the front door "Tardis Blue."  I bought a sample can of Dignity Blue paint from Sherwin Williams awhile back on sale for $3.  More than enough paint for the door. 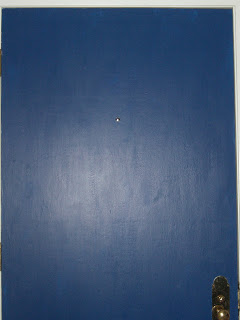 Once the door was painted it seemed like a shame not to just finish up the entryway so I decided to paint the walls.  I had another sample of paint bought at the same time as the blue.  I hadn't really had a plan for it when I got it.  It was kind of a random whim.  The color was one I had continually looked at and returned to and looked at but never really had a specific plan for.  Mainly because... are you ready for this?  It's a neutral!  Gasp.  Yes.  It's taupe.

But, see, let me explain.  After I painted the door I was trying to decide what color I should paint the entry way.  I started to think about orange.  Since I already have blue and green and red and am planning on adding yellow, whenever I get to the kitchen, I figured maybe I should have some orange somewhere.  Not so much because I get all excited about orange.  I just figured my husband would probably put his foot down on purple or hot pink.  (He isn't so keen on orange either.)

Then my sister-in-law said something so shocking I couldn't stop thinking about it.  I stayed up all night having an imaginary argument with her in my head.  What she said made no sense.  She actually suggested that I leave the walls white so the door would stand out.

Well I can't just leave the walls white.  I just can't.  But then I started thinking about the part of letting the door stand out.  Which of course is the whole point of painting a door "Tardis Blue" isn't it?  Before I had even thought of painting the door, I had been focused on having the entry way stand out.  But things changed when I painted the door.  Because now the door in and of itself makes the entry way stand out.

And so I painted the entry way "Emerging Taupe."  And I love it.  And the door stands out! It looks so great with the new shelf. 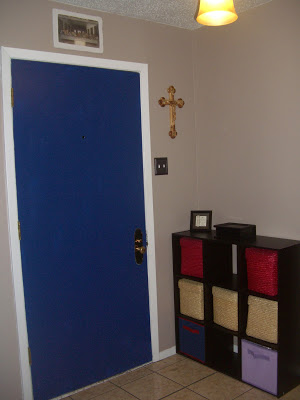 I want to get a matching set of baskets for the shelf but for now these will do.

All this and more, I accomplished in less than two weeks.  With the kids in the house, sticking their fingers in the paint and messing up while I was cleaning.  Don't get any ideas though.  I think I have worn myself out for at least the next year or so.

The house will just have to not get messy for awhile.  Somehow.

It has managed to stay fairly clean so far.

Posted by NonDomesticMama at 10:40 AM