Stuff I Want: Doors / Stuff I Did: Curtains

When I walked into my house for the very first time and saw the living room I fell in love.  Not as much with how it looked then but with how I envisioned it looking.  It had so many of the features I was looking for.  I instantly felt at home.  I just knew it was the ONE.  It was actually the first house we looked at so, because we didn't want to be the people who just bought the first house we saw, we went around looking at all the other houses.  Then we came back and bought this one.

This is what the house looked like.
What I loved?  The stone fireplace.  The space.  The two story vaulted ceiling.  I hadn't really wanted a two story house but if I was going to have one I wanted the stairs to be spectacular.  When I saw that railing it took my breath away!  How cool is that railing?  I had never seen anything like it.  Best of all check out those doors!

Ok.  Maybe not those doors in particular.  But the doors they could be!

Shortly after we moved in I decided to price my new doors.  Just to know.  So that the next time I had a few hundred dollars burning a hole in my pocket I would be prepared.

I gave the salesperson all my specifications.  I knew exactly what I wanted and would settle for nothing less.

He gave me the grand total.

Did I mention we have three sliding glass doors to replace?

What I really said was something more like. "WHAOOYYAAIIKSSSNOTHAANNKUU"

Needless to say we are still the proud owners of our original doors.

Even though the dining room door looks like this.
Now, I have to tell you, something has been bothering me about the living room for quite some time now.

Before we moved in we painted the horrid wood paneling, blue.  That's because I absolutely refused to move in until at least that was done.  Because of an unfortunate misunderstanding at the paint store (and by misunderstanding I mean we were given really bad advice) we were unable to buy paint for the whole house.  We did end up with enough paint for most of the house (if we wanted to paint it blue) because we were advised to buy four cans of paint and four cans of primer for the living room.  It took less than half a can and that was with multiple coats.  The guy told us we would need 11 cans of paint and 11 cans of primer for our dining room.  I kid you not.  Don't ever ask Sherwin Williams.  But do use their paint.  It's the best.

I also took the dated and crumbling screens out of the posts between the living room and dining room, then painted the posts and all the trim white.
Even after doing all of that I realized that most of the room is basically the same color.

The carpet is beige. 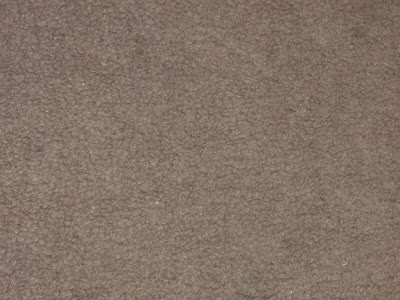 The fireplace is beige.

The curtains are beige. 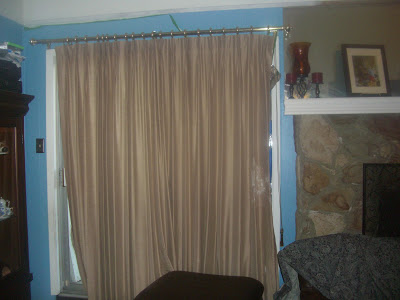 Add our brown furniture (leather couch, love-seat and recliner plus the entertainment center) and you are pretty much looking at a sea of brown/beige .  Can you imagine if I had left the walls brown too?!

The curtains also block a ton of light even when they are open.  They only open half way.  It gets dark in here and one of the reasons I was excited about having so many glass doors was because of the light.

Did I mention how much I despise that brass curtain rod?  Despise.

I honestly wouldn't have minded the curtains so much if it hadn't been for that curtain rod.   Despise!

Of course once I get my new doors I'll be able to take those curtains down.

Four years later and I finally decided enough was enough!

Why get new doors when I could just get new curtains?

Even better, why get new curtains when I could use curtains I already had?

It had never occurred to me before because the curtains and rod that were there were the fancy shmancy kind (I believe you would call them "drapes") with pleats and hooks and a pull string thingy.

I figured that if I was going to replace them I would need new curtains with pleats and hooks and a rod with a pull string thingy.
And if you are going to spend all the money to buy fancy drapes and a fancy rod and a pully string thingy, then you might as well buy the $4000 doors!

Plus I really hated those curtains.  Especially after my daughter decided to add her own personal artistry and painted them for me.  And the kids tore the hem out.

What I would love (aside from $4000 doors) would be curtains like the ones we used to have in the living room of our apartment.  Actually we only ever hung one but I had three.  Those would be just perfect.

Too bad they are not all fancy shmancy.

So, I bought a cheapo curtain rod.

I can even open them all the way and let in the light! 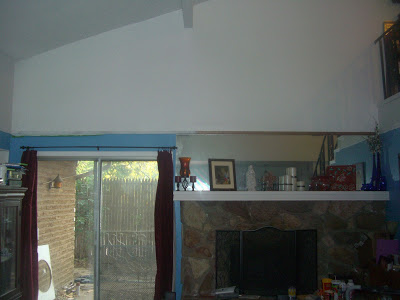 Or close them to hide the mess in the backyard.  It's left over from the bathroom project.  I'll get to it one of these days.  It's on my list...

Posted by NonDomesticMama at 1:31 PM