The Attack of the Pipe Gremlins

My husband and I bought our house three years ago.  The house was built in 1960.  We knew we were going to be doing some work on the house but we really liked the layout, space, close proximity to his grandmother, and most importantly the price tag.  I was not looking for a "starter house."  I wanted our first house to be our last house.  I never want to move again.  I also know that many people end up living in their "starter house" for the rest of their lives.  That will suit me just fine.

Now on to what we did not know.  Copper pipes have an expiration date.

Specifically a 50 year expiration date.  Right on cue ours began to give out.

had our first slab leak.  One evening we noticed a wet patch on our living room floor.  We toweled it up and went to bed.  The next morning I discovered a flood that spread faster than 3 people with shop vacs could vacuum it up.  We had to take every piece of furniture out of the room to keep it from being destroyed.

The culprit turned out to be a "pinhole" leak in the

slab under the bathroom floor.  Thanks to a sunken living room the water showed up there first.


We called the plumbers and they came out, jackhammered a nice hole in the bathroom floor right through the tile, cut out the corroded pipe and replaced it.  We were left with an uneven concrete patch surrounded by what is left of the tile floor and an invoice we will be paying off for some time. 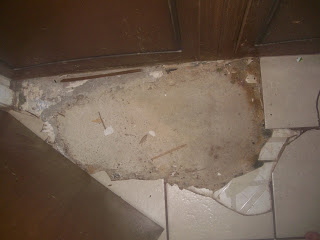 Thankfully the living room carpet was saved by calling in carpet restoration the day of the flood.  I would like to note that the only real tile in my house is in two rooms.  The laundry room and the bathroom with the slab leak.  The rest of the house has carpet or vinyl.  I now have a hole in the bathroom tile.  One of these days I will be writing a post about my new bathroom floor.  Today is not that day.

Try to picture it.  My husband was out of town for this whole week long process.  I was home with a three year old, an eighteen month old, a carpet restoration team, complete with five industrial size fans blowing, along with a dehumidifier wedged in with all the living room furniture now located in my dining room, kitchen and hallways, and plumbers jackhammering a hole through the foundation of the house.  The kids had to stay in one upstairs room with some toys and Veggie Tales movies while I sat on the steps and bounced back and forth between everyone holding a baby monitor in one hand and the phone in the other just so I could hear into the next room.  Did I mention we had no water?  Months later I am still attempting to reorganize and put back all the things we had to rapidly relocate.  It is almost humorous when I find a candle wedged in a corner under a table or DVDs in a box with dog treats.  I was just glad to have the whole ordeal behind us...

A couple of months ago we started noticing a "mushy" spot in the front yard.  As time went on it got worse.  We began to think we had a leak in the pipe from the street to the house.  The water meter quickly confirmed our suspicions.  There was definitely a leak somewhere so my husband started digging.  He dug up the mushy spot and followed the spurt of water.  Eventually he hit a tree.  It seemed the water was coming from directly under the tree.

A couple of days later I walked into the kids room and stepped into a wet spot.  So we called the plumbers again.  After performing a "leak detect" costing a couple hundred bucks the leak was located . . . right under the slab in the kids room.  When we rolled back the carpet we found patches in the concrete. 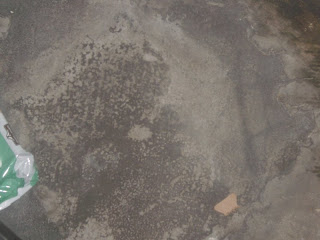 The best I can do to describe it is to say it looks like someone dug a trench from one wall to the other right down the middle of the room and then another perpendicular trench forming a T.

Oh, and yes, all the furniture, toys, books, clothes, diapers and other random stuff that comes along with children is now scattered throughout our living room, dining room, hallways and bedroom.  We were presented with the option of repairing another slab leak complete with the appropriately hefty price quote.  This is when I started doing my research.

It turns out our pipes have reached their expiration date.  This means were faced with the option of repairing another leak only to have another spring up, and another, and another, and another you get the idea.  I found an alternative option, aside from selling our house (at a loss) and running away screaming, leaving some other poor unfortunate sucker to deal with the mess... tempting as that was.

The option was a newer technology called Dura Flo.  Basically the plumbers blow sand through all the pipes and then follow that up with an epoxy coating.  This has the effect of basically re-piping the whole house but much less destructive.  This is not without it's cost.  The plumbing company did sweeten the pot a bit by offering to fix several other issues we were having (the plumbing problems never end at this house) for a fraction of the cost.  The Dura Flo also comes with a lifetime warranty, as in never have to worry about another slab leak again.  We opted for the Dura Flo.

About a month ago we had the plumbers come out and Dura Flo our pipes.  It was a three day process during which we had no water.  We are actually starting to get used to that.  I will never take running water for granted again!

Unfortunately the coating did not seal the leak so out came the jackhammers.  The coating also sealed shut the pipes in the shower wall so that had to be cut out and fixed.  The plumbing company sent a tile guy out to repair the shower tile.

I must add at this point we have used three different plumbing companies through all our plumbing ordeals and I can't recommend the third company highly enough.  I will never use anyone else again.  If you live in the DFW area and need a plumber, especially if you have a slab leak, call DFW Pipe Restoration and Plumbing.  They even did a good job of patching the concrete as level as possible since they were basically patching a patch.  Their patch is more level than the patches surrounding it.

After everything was completed including our brand new hot water heater ( hot showers are awesome!) the meter indicated we still had a leak.  It turns out there really was a leak in the yard right under the tree.  The second plumbing company had been the ones to do the leak detect and had assured us there was no leak in the yard...  The solution for the yard was to replace the entire line from the street to the house leaving my tree intact!  Thankfully they offered us a discount on that again because of all the other work we were having done.

Just to recap . . .  We now have an entire new water line from the street to the house as well as epoxied pipes throughout the house.  I might also add, shortly after we moved into our house we had the sewer line "bust out" and repiped.  We had better never have another plumbing issue again in our lives!!!

Now, I know what you must be thinking.  Surely this must be the end of our grand plumbing saga (I can assure you I was under that assumption) but the pipe gremlins had other plans.

My husband and I even had a bit of a disagreement because he is so overly paranoid he wouldn't allow me to buy brand new cork flooring and install it in the kids room knowing we would never have to worry about another leak in there again.  For some reason he was afraid a leak would spring back up and ruin the floor.

A week ago I had to eat crow.

My husband decided to start moving some of the kids furniture and toys back into the room to clear out our dining room in preparation for Thanksgiving.  This time I was the one to object.  I wanted to have a floor down first!  We walked into the empty room to find a lake forming on the concrete floor.  Yes, we had another slab leak!  Thank goodness we had decided to go with Dura Flo.  The way I had worked out the figures fixing two slab leaks along with paying the difference for the other work that was done would have cost us the same as having the Dura Flo done.  In other words we have now broken even.  I can also be pretty confident that if we had not chosen Dura Flo we would have been repairing slab leak after slab leak.


The plumbers came back out and jackhammered the floor back up basically in the same spot as before and found a good little hole formed in the pipe along with a nice dent that was trying to form another hole.

The mystery . . . this pipe was not coated!  I must again give the plumbers props.  They could easily have fixed the pipe and said we were in the 10% of people who still get another leak and walked away.  We would have never known the difference.  Instead they were honest that we have some very oddly laid out pipes.  Honestly they really can not figure out how they could have started at point "A" sending through epoxy and have it come out at point "B" but miss a middle section entirely.  They even tested by capping of the uncoated section to see if they could still get water through the pipes and got nothing.  They have even consulted with the Dura Flo parent company and are coming up with no explanation.  I think the pipe gremlins ate the epoxy.

Today the plumbers are here again to section off the uncoated pipe and coat it.  I'll let you know how it goes.  Hopefully one day very soon I will be writing a blog about the new floor in the kids room.  Sadly it will not be cork but I think we have finally come up with an option both my husband and I can be happy with.  It will be very budget friendly and if the pipe gremlins decide to attack again there will be minimal to no damage done.

Now to figure out how to fit our entire family including in-laws and in-laws of in-laws into our dining room along with all the extra furniture and other boxes.  I am considering using the dresser as a dessert buffet!  Maybe some of the boxes can double as extra seating at the kids table!!  This will be a Thanksgiving to remember. 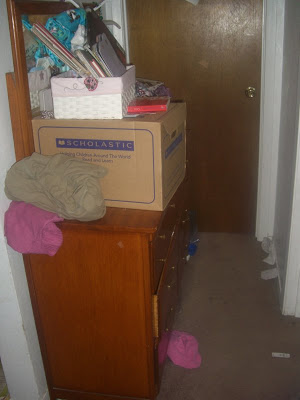 I will be giving thanks for running water!

Posted by NonDomesticMama at 2:40 PM