One year ago exactly (Oct 6th-8th) our pipes were coated with epoxy to prevent any future leaks.  When I saw the dates on the paperwork... well lets just say my reaction wasn't pretty.

One month later we had another leak.

One year later we had another leak.

Today the plumbers came over to check out our Pipe Gremlins.  The first words out of their mouths when they saw the pond in the kid's bedroom were, "Oh wow!"  So obviously we were off to a promising start.

A few minutes later they confirmed that we do in fact have a leak.  Which is a relief because that totally rules out the theory of my daughter peeing a couple of gallons of liquid onto the floor.

Then the leak detect process began.  This process is never good in my house.  It always involves plumbers running up and down stairs, in and out of the house, back and forth between rooms and exclaiming things like, "why would the pipe run that way?" or "where are the pipes?" or a whole lot of "WHAT?"  Let's just say, if they weren't professionals, they would probably be throwing out some colorful words.

Pretty quickly they realized the leak seems to be in the bathroom.  From the kid's room it seemed to be coming from the bathroom.  From the bathroom it seemed to be coming from the kid's room.  Which led to the initial conclusion the leak must be in the shower wall.  It just so happens that when the epoxy coating was applied it had sealed a valve shut in that same shower wall.  The wall was cut out and the valve was replaced.  Easy.  If that is where the current leak is it will be an easy fix.  No jackhammer.

I did my dance of joy.


The plumbers brought in their super special fancy leak detect equipment to locate where exactly, in the bathroom, the leak is.  (Yes, that is totally the correct technical name.)

That's when it started to go downhill.

The plumbers started running up and down the stairs, in and out of the house, back and forth between rooms and exclaiming things like, "why would the pipe run that way?" and "where are the pipes?" and a whole lot of "WHAT?"

Also overheard, "We'll have to dig a tunnel."

So, I'm pretty sure that means this will be a simple easy quick fix.  Dance of joy?

The problem is, wherever they listen for the leak they hear it.  No matter where they are in the bathroom, they hear the leak.  Just as loud as anywhere else.  Like they are right on top of it.   Ev-er-y-where .

Then they packed up their fancy equipment and left.  The manager wasn't in the office today so they will have to "discuss" with him on Monday "what to do."

I've started coming up with a back up plan.

You know.  Just in case.

Several options have been deliberated.

Now, I know you are never supposed to negotiate with terrorists.  But hear me out.

We have a swimming pool in our back yard.

No, I mean an actual pool.  Not a flood.  I get the confusion.

It has a problem retaining water. 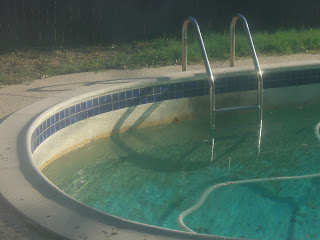 What if I offered to let the Pipe Gremlins live in the pool?

They could leak water into it, which would compensate for the water leaking out of it!

Posted by NonDomesticMama at 5:42 PM