My Kids Have a Bedroom!

A couple of weeks ago, bright and early on a Saturday morning, my husband and I packed the kids up in the car and drove the hour drive to his mother's house.  After dropping off my husband, the kids and I then drove an hour and a half back, past our house, to a birthday party for one of my son's best buddies.  (My son was rather dismayed that for some reason it took 2 1/2 hours to drive to the birthday party!)  While we were having fun splashing and eating cupcakes, my husband and his mother were in her van, driving the five hours to my parent's house.  They stayed for a few hours and then turned right around and drove back.

At around 1am I got a call from my brother asking me if my husband had arrived home yet.  I looked outside to check and discovered, to my surprise, a vehicle in the driveway containing my brother and sister-in-law!

At around 2am my husband arrived home.  He had dropped his mom off at her house and we would be taking her van back the next afternoon.


All so my kids could stop sleeping on the floor!

See, a couple of weeks before that my dad mentioned (for the millionth time) that he and my mom wanted to get rid of my old bunk bed, so that they could actually do something with my old bedroom.  He asked me (for the millionth time) if I would want it.  Previously the kids were sleeping in the crib & toddler bed and there was no room for a crib, toddler bed and a bunk bed.  Now, of course, they were needing a bed and my parents were needing to get rid of a bed...  Unfortunately the bed was a monstrosity and was also a 5 hour drive away.  What could be done?

So, my husband got the bright idea to rent a minivan and drive to my parent's house to collect the bed.  Just to be sure it would fit, he measured his sister's minivan, only to discover that there would be no way of fitting the bed.  So, he considered renting a bigger van and called his mother to ask her to measure her, van so he could rent one the same size, if it was big enough.  She not only agreed to measure her van but offered to let him borrow it.  Then, just for fun, and to get out of the house, she actually rode with him.  Not a trip I would have chosen but to each their own!

The measurements were tight but with a little tilting my husband was pretty confident it would all fit.

Which is why my brother and sis-in-law got the bright idea to help.  Because they were on vacation.  And apparently had nothing better to do than load half a bed up in a friend's vehicle and drive 5 hours.  Then turn around the next day and drive back.  Oh, did I mention it wasn't their vehicle?

Because, as chance would have it, some family friends had just gone on vacation and my brother had driven them to the airport, in their truck.  So, he had the truck.  And of course when he called them and asked if they would mind if he loaded it up with a bunch of junk and drove it for 10 hours, they obviously said, "No problem!"  (The vehicle belongs to the mother of the godfather of my son.)

And now my kids have a bed.  A real bed!  So their room can now officially be called a bedroom.

Just to recap, all we had to do to get this bed was...

2. In a van borrowed from his mother

3. To load up and drive back with the bed

4. Accompanied by my brother and his wife

6. In a truck borrowed from another friend...

Glad that was easy!

So, we owe quite a few people... like indebted for life, on top of previous indebtedness for lifeness.  Ya, we owe them BIG .

Are ecstatic over their new room.
They continually thank me for their new bed.

I cleared a space for it!!!

I was even able to move their dressers back into their room!  (Which helped me clean up the homeschooling room.)
The little disks are to prevent gouging the floor.  Plus it made the dressers very easy to move.

I've even started to organize their toys. 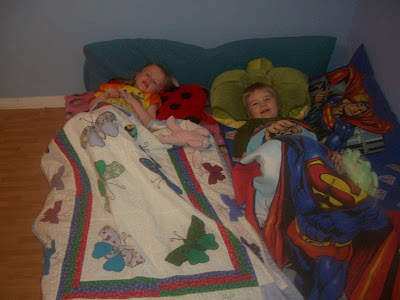 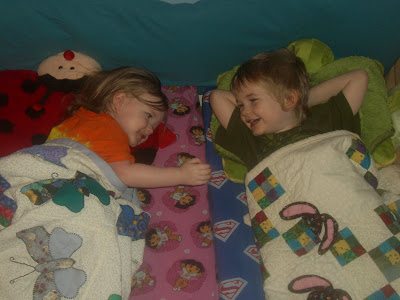 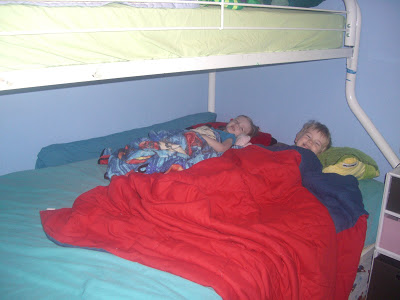 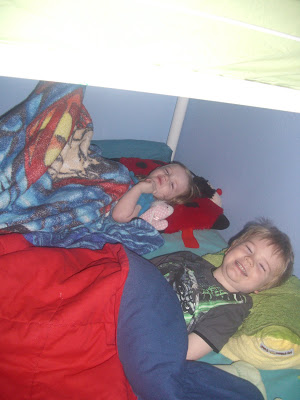 Posted by NonDomesticMama at 12:13 PM