Ever have house guests?

You know how despite the fact you are really happy to see them and are excited for their visit you tend to breath a sigh of relief that they are gone.

My brother and his wife were here for a weekend visit and left an hour and a half ago. 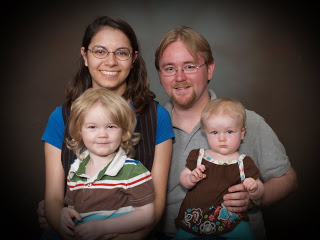 The thing is you have a routine and that routine gets disrupted when you have house guests.

Normally we like to spend a nice leisurely weekend at home flipping through hundreds of tv channels and proving once again that "there is nothing on."  Instead we were forced to "go out" and have a day filled with fun and excitement at the Scarborough Renaissance Festival.  Instead of beating his high score on Angry Birds my son spent his time riding an elephant and beating his cousin up with a padded sword.  Instead of running around the house wearing her princess tiara and playing with toy ponies my daughter ran around the festival wearing her princess tiara and seeing real ponies.  Instead of sitting on the couch refreshing Twitter I spent the day in the company of my husband, children, brother, sister, two sister in laws (husband's sis and brother's wife) and my nephew and nieces.  Not even close to routine.

Yesterday was spent hanging out with bro and sis-in-law here at home.  My son spent the day introducing them to such games as Angry Birds and Super Meat Boy.  Then we met my sister for dinner.  Not too far off from routine.

Today is where it went horribly horribly wrong.

It all started when they decided they were hungry.  Hungry!!  Can you imagine??  The nerve!  Even worse, they wanted to eat.  Now here's the kicker.  They wanted to eat their own leftovers which they expected to heat up.  In my kitchen.  Have you seen my kitchen???

So, I took my brother into my kitchen to introduced him to my microwave.

He took one look around the kitchen and this is what he had the nerve to say.

"I'll do your dishes if you clean out your microwave."

To which I responded,  "Hey, that's not fair.  Why do I have to clean out my microwave?"

Then I glanced at the dishes.

And I realized how colossally stupid it would be for me to refuse his "bargain."

So I cleaned my microwave.

And he washed my dishes.

While we were doing that my sis-in-law sneakily cleaned my living room and vacuumed.

See what I mean?  Not the routine.  Way way about as far away as you can get from the normal routine.

My children were so traumatized by the incident that when it came time for my bro and sis-in-law to leave they both burst into uncontrolled sobbing.

My son cried for an hour.

As I rocked my son in the living room chair and watched Krypto the Superdog at his request he told me, "Mom, I've had a rough day.  And I have hiccups."

Like I said before, "You know how despite the fact you are really happy to see them and are excited for their visit you tend to breath a sigh of relief that they are gone."


This was not one of those visits.

Come back soon Unkey Monkey and Aunt Jamie.  We miss you. 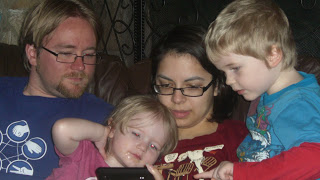 Posted by NonDomesticMama at 5:50 PM