My husband complimented me on my shirt.  "You look nice today.  Kind of like a schoolteacher or something."  I then explained to him the beauty of the two in one shirt.  The ultimate lazy outfit.  Comfy as a t-shirt but looks like you made some sort of effort.  He was amazed at the genius.  I have decided I need to buy more of these type of shirts because I really am that lazy do love them.

I did change up my accessories a bit.  Because my usual bracelet broke.  So I wore this one instead. 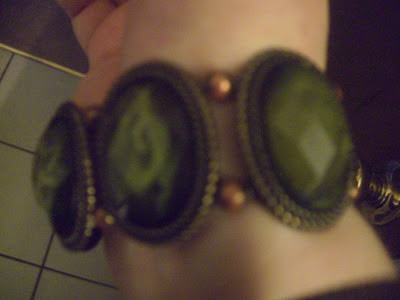 The socks were hidden during church under my boots but I took my shoes off during book club and got several compliments on them.

The shoes were bought a few months ago in a full size too large.  He is already growing out of them.  Which is ok because I am going to put pink shoelaces in them and let the Princess wear them next.

What the Princess wore.

Dress and leggings: Birthday gift
Shoes: Shoe Carnival
Socks: Gift from a friend who crocheted the fringe on herself and added the beads.  So obsessed with the cuteness!

The towel on the floor was to catch the water dripping through from the upstairs bathtub while my husband took his shower.

And we went with a ponytail which by the end of Mass looked like it had been slept in thanks to her rolling all over the pew.

After Mass my husband took the kids to a play date movie and my friend who met us at Mass drove me home for book club.

Which is when I realized I didn't have my keys.

That's right.  I locked myself out of my house on the day that I hosted book club.

Thankfully my sis-in-law has a spare key.

And was able to come rushing to my aid.

And his Granny and Aunt did laugh at me when I called looking for a spare key.

In case you are wondering.  I am sure you are.  The book club book was Out of the Silent Planet by C.S. Lewis.  My pick.  His Space Trilogy are my absolute favorite books of all time.

Posted by NonDomesticMama at 12:48 PM