There's something you should probably know about me.  Whenever the latest greatest fad comes along and "everyone's doing it" I tend to dig in my heels and blatantly refuse to follow the trend out of principle.  This is why I refused to read the Harry Potter books or Twilight.  It's also why, when everyone started watching Extreme Couponing, I rolled my eyes and ignored it.

Something else you should probably know about me.  When for some reason I am forced to give these things a chance I tend to find out there is a reason why "everyone's doing it."  Like when my roommates started reading Harry Potter out loud to each other and I thought, Hmm, this book sounds kind of interesting.  Or when my husband popped the Twilight audio book into the CD player in the car during a road trip and I found myself hooked.

Also I usually find that instead of getting casually interested in something I have to get all out obsessed.   OBSESSED .

Recently by chance? fate? divine intervention? my husband and I were watching a show on the DVR.  When the show ended and flipped back to TV we both sat and vegged for a minute trying to get the strength to drag ourselves off to bed.  As we sat there we couldn't help but pay half attention to the show that was on.  Extreme Couponing.


I have seen quite a few commercials for that show and seen all the buzz.  I had no interest in watching a bunch of crazy people make a big scene about how they go to extreme measures and get free stuff.

I have never been a coupon user.  They seem like such a waste of time.  When my kids were both in diapers I remember opening the giant box of Pampers and seeing the $1 off coupon inside and laughing.  Gee, I could save $1 off a $20 box of diapers.  All I have to do is cut out the coupon and remember to bring it with me, remember to use it while dealing with two babies at the check out line.  I have been behind those people.  The ones who have 50 coupons, none of which work, and so they sit for 20 minutes arguing with the check out person while all the people behind them consider offering to pay them the .25 cents just to move on!  No thank you!

I had plenty of reasons I couldn't do that.  I am not that organized.  There is no way I could ever manage to figure all that out.  I would end up buying things we never use just because I had a coupon and then it would actually be a waste of money.  I am not going to go to 5 different grocery stores.  I go to the store I do for a reason.  It might be a little more expensive than other stores but it's worth it for me not to have to deal with bad customer service.  I love my store and I refuse to change just to save a few pennies.  And most of all I am not going to be one of those people, holding up the line, arguing over .50!

But I was a little intrigued.  So, I asked my friend Google for more information and started researching.  Cause if there's anything I love to do it's research everything there ever is to know about something random.

Then just to prove to myself that it was all a waste of time, I bought a Sunday paper.  I clipped out a few coupons, only for things that I always buy anyway, and brands that I buy anyway because I'm not going to buy a different brand only to find out that none of us like it.

I went to the grocery store.  Filled my cart with groceries.  I didn't buy anything that I don't buy normally, but I did buy more in one trip than I normally do.  See, I try to keep a rule to only buy one non grocery item at a time.  It just happened that we were out of trash bags, ziplock bags, and dish-washing soap.  Normally I will only buy one of these items at a time because I know they can really bring up the cost of my groceries.  If I have to go a week without washing dishes then that is a sacrifice I am willing to make.  I happened to have coupons for all those items so I decided I would go ahead and get them all at once.

Usually I spend $200 at the grocery store.  I have tried and tried to bring that total down but it seems like my magic number.

Imagine the heart palpitations when I saw that my total was closer to $300.  This is why I don't buy all those other household items at the same time.  An extra $10 here and $5 there really adds up.

My husband was going to kill me!  I held my breath as I handed over my coupons.  I figured it would probably take off about $10 or $15.

Imagine my surprise when...

As I said, I can't ever seem to do something like a normal person.  No, I have to make it into my life obsession.  So, I immediately made myself a coupon binder and started buying 4 newspapers a week.  I even looked into subscribing to the paper but would you believe it's more expensive to subscribe than it is to just buy it at the grocery store?!

This morning I came out to find this.
The strange thing is that I specifically remember putting those scissors away yesterday because I didn't want little ones to get their hands on them.

I noticed a few coupons had fallen under the table.

When I bent down to pick them up I found this. 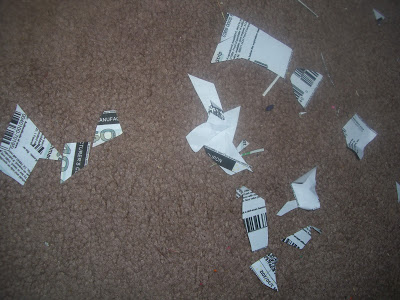 Looks like I have another little coupon clipper in the house.

She was very repentant.
"Where did you get the scissors?"

Posted by NonDomesticMama at 11:11 AM