Today we had an appointment with a Neonatologist.  I have been looking forward to this appointment for weeks with a mixture of excitement, nervousness, anxiety and various other emotions.  To me this was one of our most important meetings.  A what to really expect kind of meeting.  I went in with a long list of questions swirling in my head.

Those questions evaporated within about the first thirty seconds.

Our meeting started with the doctor asking me what I knew about our son's diagnosis.

He asked me what I was expecting.

I told him that while I am very aware that the survival rate is low and the chances of being able even do anything to save or extend his life were slim, I wanted to do everything in our power if the opportunity presented itself.

I was met with a blank stare.

Then he basically told us that they don't really do any kind of intervention with a Trisomy 13 baby.

Instead I heard this.

"We aren't equipped for any kind of interventions.  If you wanted to do that you would have to deliver at a different hospital."

He basically said that they are equipped to handle premature babies but that is about the extent.

My husband asked for some clarification regarding what they were not equipped to do with a Trisomy 13 baby.

I pointed out that we had already met with a fetal cardiologist who told us that heart surgery wouldn't be performed at birth for a VSD on any infant.  She also pointed out that Trisomy 13 babies don't die of heart failure they die of respiratory failure because of the Apnea.  The brain simply does not send the signal to breath.  She also specifically stated that the hospital we have been planning on delivering at is "more than equipped to handle the needs of a Trisomy 13 baby."  (My husband at the time told me he got the vibe of "since there isn't anything we can do anyway" but I didn't pick up on that at time time.  Now I fear he might have been right.)

The response to that was basically, yes that's correct but if the baby did have to be put on any kind of breathing assistance we aren't really equipped to do that and then send them home.  For example if the baby needed to go home with a c-pap machine we wouldn't be able to provide one.

He also brought up feeding tubes and said again that wouldn't be something they could provide for at home care.

A pretty much exact quote.

"If you were planning on actually taking the baby home, we wouldn't be equipped for that."

In other words, we are only equipped if the baby doesn't survive.


WHAT???  Is somebody forgetting the 10% survival rate.  I know it's small but what do you do if the baby does survive?  Transfer him to another hospital and let them send him home?

I understand that most Trisomy 13 babies don't survive to leave the hospital.  I do.  So, I can see why doctors would kind of have that understanding, even expectation.  However, I don't understand not even allowing for any other option!

I have known all along that this hospital doesn't have a level 3 NICU but I was under the impression that it was "more than equipped to handle the needs of a Trisomy 13 baby."  I basically took this to mean that they had the equipment and knowledge to handle the Apnea issue and basic immediate needs.  Then for further needs like the heart defect we would need to take him to another hospital later on.

At this point the doctor goes back to not having the facilities to handle surgeries.  (I thought we had already covered that.)  Then he mentioned, for example, "If the baby needed a tracheotomy we would not be equipped for that."

Wait... tracheotomy?  Where in the world did that come from?!

The Apnea issue is a brain misfire.  It has nothing to do with any kind of blockage.

This is the point that I begin to wonder if I know more about Trisomy 13 than this doctor does.

That was pretty much the extent of our meeting.  It might have lasted all of ten minutes if that.  He ended it by asking if I wanted some literature about Trisomy 13.  I asked him if he had some.  He responded that he could print off a couple of pages and then stated dismissively it was nothing I probably didn't already have anyway.  I wanted to ask him if he wanted me to bring him some literature about Trisomy 13.

We walked out of that office completely deflated and with more questions than we did before we went in.

Our main question was, why we were even meeting with a doctor who was simply telling us he could and would do nothing anyway?  What was the point of meeting with him in the first place?

When we got home, my husband called the Maternal Fetal Medicine doctor who had set up the meeting to ask that exact question.  He was stumped.  He told my husband that he was shocked we had left so quickly.  He had come back to the room to follow up with us on something else and couldn't believe we were already gone.  He expected the same things we expected about the meeting and couldn't believe it had gone the way it had.  He said he would find another doctor to meet with us.

Lets start with this.  I get it.  I understand if the hospital is not equipped.  I really do.  My question is why are we finding this out two months before the baby is due?!  Shouldn't that have been information to share, I don't know, day one?!  Instead of being assured that the hospital is in fact equipped?  If we have to deliver at a different hospital it means starting at square one.  Like most likely new Ob-Gyn and everything.  We all know how well I deal with that.  And this baby is coming in two months.  Yes, I know I said that already.  But he is coming in two months.  One, two.  Two.  October 22nd has even already been scheduled.  Plans have been made and vacations scheduled for that date.  Square one?!

Issue number two.  Something I have had issues with in the past when I had to stand up for my right to attempt a VBAC with my daughter.  Where are our options?  Ok, it was made very clear by the Neonatologist that they don't typically try any interventions because it "typically doesn't matter anyway."  In other words, why save the baby's life if he is just going to die anyway?  Anyone else see some circular reasoning here?  Then there seems to be surprise when studies show that babies who receive interventions have higher survival rates.  "79% of the children who received “full intervention” were alive at the time the questionnaire was sent. Those children were a median age of four years old."   Seems like an improvement over a 10% survival rate if you ask me.  In my husband's words, "You mean if you bother to save their lives they live longer?!"

Ok, so the doctor may not believe it's worth the time, effort, money, whatever else, to attempt interventions.  But what about our choice?  Shouldn't we at least be presented with the option rather than having everything assumed and decided for us?  I mean we are talking about a child's life, not a used car.  I feel like my son has basically been "totaled."  Like I am being told he isn't worth fixing or even trying.  Well he is worth it to me.  Even if it simply means buying a little more time, I will take all the time with him that I can get.

And even if it doesn't mean buying more time.  I understand, really I get it.  Chances of bringing my child home, regardless of interventions, are low.  I know that.  But if I am going to lose my son, I know I can't do that feeling like there might have been something I could have done.  For my own peace of mind, I need to know that we did everything in our power to save him.  Beyond that his life is in God's hands.  God has given me this gift and I feel like He expects me to do whatever is in my power to care for him while I have him. 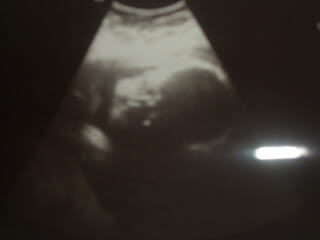 I just don't understand why the scenario didn't play out this way.

Meet with doctor to go over options.

Discussion about various options/levels of intervention and pros/cons doctors recommendations.

Decisions made (by us) about intervention options/Discussion of hospital qualifications.

Recommendation based on decisions about interventions for appropriate hospital.

This could all have been done at 20 weeks instead of 30+.

Really, is that so much to ask?  To even be consulted about our wishes?  Instead of assumptions made.  Why would a Neonatologist even agree to meet with parents of a Trisomy 13 baby if all he plans to say is "there is nothing I can do."  Don't even set up the meeting.  Just pass the message along!

What do you want to bet we get a bill from him...

This morning we had a meeting with my Ob-Gyn.  (Have I mentioned before how much I LOVE her??  I love her!)  She addressed all my concerns.  She told me that she and my Maternal Fetal Medicine doctor have had conversations in the past that it might be better for me to deliver at a different hospital and after they spoke with the Neonatologist their thoughts were confirmed.  I will be delivering at a different hospital and unfortunately that means she will not be able to deliver my baby.  She made it very clear that she isn't sending me away and I am still her patient but for the sake of the baby the continuation of my care during this pregnancy (though I am still welcome to see her as well) will be at the other hospital.  The good news is that there is a clinic at this other hospital that deals specifically with situations like mine.  High risk babies who need to be delivered at a level 3 hospital but whose mothers have been receiving care from a doctor with permissions at another hospital.  There is a team of doctors who will work with me and one of them will deliver the baby.  They have the facilities to care for the baby in the same hospital  I deliver in so there will be no need to transfer him  and they also have programs for ongoing care as well as home care.  They even have programs to help with care of older siblings of the baby when needed.  She has already contacted them and is sending all my records over.  They will contact me to set up my first appointment.  So even though I will be delivering in a different hospital and that does mean a bit of a plan change, I am not having to start all over.  I am very relieved that my concerns are being addressed and that we will now know that if anything can be done to improve our son's chances of survival those options will be available to us.  She affirmed my desire to take any possible steps to give my son any advantage possible and told me that if she were in my situation she would feel the exact same way.

Needless to say I am feeling very encouraged today!

Posted by NonDomesticMama at 5:28 PM