He is the king of fit pitchers.  When he really gets going he will screech louder than any horror movie victim.  He can go for hours and never tire.  When he was still a tiny lil guy he would sometimes fight bedtime so hard that he would still be screaming 4 hours after he was put in bed.  I would think, surely he will pass out from sheer exhaustion at any moment.  No.  Never.  It was enough to drive me over the edge.  I would literally have to force myself to stay away from him because I was seeing red and there was no telling what I might do.  Somehow we both lived to tell the tale.  He has outgrown his fits for the most part.  Sometimes we still see glimpses of the little Hulk but they are pretty rare now.  And they never last longer than about twenty minutes or so!

She tries to throw little tantrums sometimes.  Something upsets her and she drops down to the floor crying.  She always does the little, peer out to see if anyone is watching her, maneuver.  Unfortunately for her, her older brother ruined me.  When she lets out her tiny squeals, that normally last for all of two and a half minutes, I can't help myself.  I laugh.  I try not to let her see it.  But it's so darn funny.  Like that little display is going to budge me!  I have lived through WAY worse.  When I send her to her room to cry it out she is usually done before she makes it to the room.

All this has me wondering. 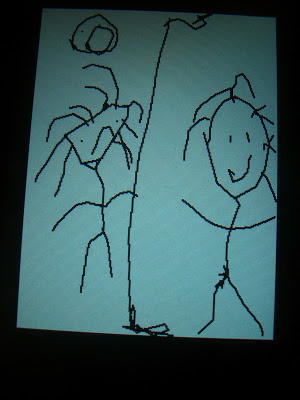 When I pitch my fits, does God see red?  Does He throw His hands up in exasperation that I never learn?  Or does He laugh at me?

I like to think he laughs at me.  After all, He is infinitely more patient that I could ever be.  And I sure do need that patience.

Hopefully, as I have gotten older and wiser, my fits are less like my son's and more like my daughter's.  Because, in all honesty, I know better.

When something doesn't go according to MY plans, I know that I should put my trust in Him.  He knows what's going on.  He has a better plan than mine ever could be.  Like I said, I KNOW all that.  I'm just not always happy about it.

Recently, when things didn't go according to my plans, I managed not to throw a monster fit.  I refrained from shaking my fists at the heavens.  I even admitted that God probably knew what he was doing.  Didn't mean I liked it.  Oh, I pouted.  I whined.  "This better be good!"  I sulkily warned Him.


See, at 10 weeks pregnant, I found myself without an OB/GYN.  For reasons, related to my stubborn insistence on attempting a VBAC when my daughter was born, I was told not to come back.  By phone call, letter and certified letter.

Know what I like even less than change?  Rejection.  The idea that someone out there doesn't like me, gulp, maybe even hates me?  Abhorrent.

Know what I like even less than change and rejection?  Making phone calls.  Oh boy.  I hate the phone with a passion.

The best inventions ever?

Cell phones.  Knowing that when I call someone, that person is actually the person who will answer.  Heaven!

Caller ID.  I can actually choose to answer or not based on who is calling me.  Before caller ID, I used the answering machine to screen calls.  The downside to that, was that many times I had to call people back.  And that was before cell phones.  Agony.

So, I found myself having to research and pick a new doctor.  Finally, I found one who was in the same network as my primary care physician.  I thought it would work out well because they could share all my records and work together if that was ever necessary.  Ok, God.  Maybe you know what you are doing...

I made the dreaded phone call, fully expecting to hear that she wasn't accepting new patients.  Amazingly they had an opening and my appointment was scheduled for her first available date.  Four weeks later.

On the day of my appointment, with my stomach doing flip flops, I drug myself into her office.  I filled out copious amounts of paperwork.

I was called back into an exam room.  The nurse went over my paperwork.  "Why did you leave your previous doctor?"  I had to go through the whole painful story.  Then again for another nurse.  Finally I was left to wait for the doctor.

She came in, sat down and delivered the bad news.  She couldn't take me as a patient because she was in the same call group as my previous doctor.  She listened to the baby's heartbeat and gave me a list of the doctors that were not in the same call group.  There were 7 names on the list.  Talk about narrowing down my choices.

I left her office again feeling rejected.  More change.  More phone calls.  More unknown.  God and I might have had a few words.

Now, I was 16 weeks pregnant without an OB/GYN.  I was very aware that the big 20 week ultrasound was approaching and I wouldn't even have a doctor.

I started to wonder if a home birth was an option.  People can perform their own C-sections at home, right? Who needs a doctor anyway?!

As if I really have any right to complain when people all around the world actually die from lack of medical care.  Or lack of money to pay for medical care.  Here I am with good insurance and a list of 7 doctors all less than a 10 minute drive from my house.

So, I found myself having to research and pick another new doctor.

God, you better know what you are doing!

To the point that God finally spoke.  The Holy Spirit used the words of two of my favorite bloggers to speak right over my little tantrum.  Guess what He said?

May 17
Life Happens. Our faith is tested. We can't control what tomorrow will bring, but we can control our response to it.
I said, but this whole thing is so inconvenient!

He said, Sacrifices are inconvenient.

I said, fine.  I'll stop pitching my little fit.  But I don't have to be happy about it!

Again I made the dreaded phone call, fully expecting to hear that this doctor wasn't accepting new patients.  I was pretty convinced that each of the 7 doctors on the list would have some reason that they would be unable to take me as a patient.  Amazingly the first doctor I called had an opening and my appointment was scheduled for her first available date.  One week later.

One week?  What was wrong with her?  Why did she have an opening so soon?  Does she not have any other patients?  What do they know that I don't know?

As you can see I was still not ready to fully trust what God was so clearly telling me.

On the day of my appointment, with my stomach doing flip flops, I drug myself into yet another new office.  I filled out copious amounts of paperwork.

I was called back into an exam room.  The nurse went over my paperwork.  "You are transferring from this other doctor?"  I prepared myself for the inquisition to follow.  "Yes."  "Ok.  Just sign this form and we can transfer your records.  The doctor will be right with you."

I was still waiting for someone to tell me to leave.

How do I begin to describe what happened next?

I imagine it's something like my son felt one day when he was told to turn off the TV and put his shoes on.  All he knew is that he wanted to watch TV.  I was ruining his plans.  There was pouting and sadness.  He would have been perfectly content to sit in front of that TV all day, never knowing what he might be missing out on.  Until he discovered himself at a friend's birthday party, at Lego-land!  Way more exciting than sitting at home watching TV.  Because of course I knew the plan all along.  I knew there was something more.  Something better.  I just didn't want to spoil the surprise.

The doctor came in and sat down and we began to chat.  I don't mean she asked me a bunch of medical questions and gave some advice and exited the room.  I mean she sat down and chatted with me.  Like we were two old friends catching up.  We laughed and talked.  We covered all the important stuff, of course, but we also chatted about babies, sleep deprivation, breast feeding.  You know, little chit chat stuff that wasn't on the chart.  I never felt like she was just trying to get me checked off her list so she could move on to the next patient.  She was warm and caring and genuine.

When I answered questions I never felt any underlying current of judgement.  She asked me if I had attempted a VBAC with my daughter.  I told her I had.  She didn't roll her eyes.  She didn't shake her head.  She didn't purse her lips.  When I told her that I had a "window" develop in my uterus, she didn't say, "That's why VBACs are so dangerous.  Tsk tsk."  In fact she was very reassuring.  "Sometimes that happens.  There can be some stretching.  The good thing is that you recognized something wasn't right and stopped when there was a problem."  What?  She was actually acknowledging and even affirming my decisions regarding my own medical treatment???

I felt a connection to her that I have never felt with any of my doctors before.  When my previous doctor called me to tell me she would no longer be my provider, she said it was because of our lack of communication.  Which I agree with.  I never felt like I could really communicate with her.  Like she wasn't hearing what I was telling her.  Maybe she didn't want to hear or maybe I wasn't expressing myself well enough.  Most likely a little of both.  I didn't feel comfortable enough to really communicate with her.  And I was always getting mixed messages from her.  "I'm supportive of your decision to VBAC.  When do you want to schedule your C-section?"

My doctors have always been professional and polite.  But this doctor is more.  I really like her.  No, I LOVE her!!  I walked out of that office skipping.

And God looked down, with a twinkle in his eye, and said.  "Told you so!"

Posted by NonDomesticMama at 11:48 AM