A few months ago my husband and I were on our way to a doctor's appointment.  As we walked down the hall toward the office, my husband turned to me and said, "Your purse is looking a bit shabby.  It might be time for a new one."

This coming from the man who has been known to go out in public with holes in his t-shirt. 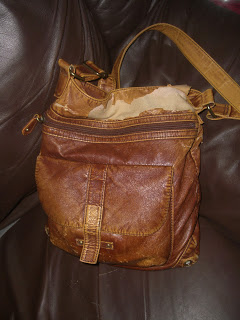 Ok, so it was looking a little worse for the wear. 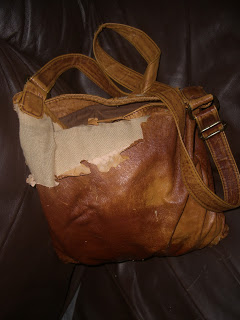 But it was entirely still functional.

Plus I really love my purse.

Let me tell you why.

Tons of space to put everything I need and more.  The more is probably why anyone else who ever picks up my purse usually exclaims something along the lines of, "WHAT do you have in here?!  Rocks?"

Random fact about me.  When I was little I started carrying a purse to church with me so I could fill it with all the rocks I collected.  True story.

Now, I have been known to carry things in my purse that I really didn't need.  For example when my husband met me I carried an umbrella in my purse.

Random fact about me.  I never use an umbrella.

In case someone else needed one.

Random fact about me.  I'm a people pleaser.

Years worth of receipts?  Thrown in the purse until it gets so heavy I have to clean it out and am amazed to discover that those receipts weighed 5 (bazillion) pounds! 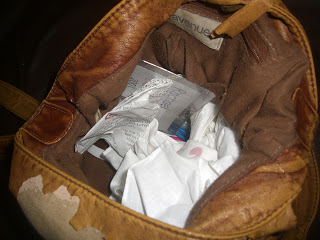 Other things I love about the purse.

It has a front pocket in which to put my keys and cell phone.  Which makes it easy to find them.  As opposed to digging through the mass of receipts, wallet, toys, diapers, crumbs, wrappers, rocks and assorted umbrellas. 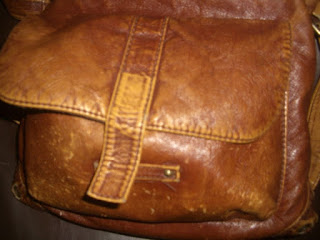 It has another large outside pocket so I can put anything else important that I would actually want to find later. 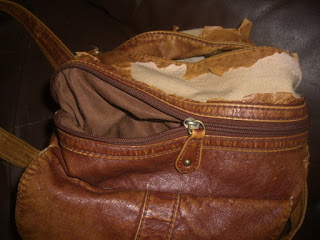 And of course the all important inside pocket to put makeup that I never wear anyway.  Just in case I need a touch up.

Most important of all, it was a cross body style.  I can't tell you how amazing it felt the first time I carried it and didn't get those knots in my right shoulder blade.  I'll never go back!!!

Now, I'll admit that there were a few things about the purse I would improve if I had the option.  Aside from the "shabby" appearance.

It does not zip closed but instead has a snap at the top.  A snap that never stays closed.  Which makes my husband super paranoid that I will somehow randomly spill the contents of my purse out and someone will take my wallet or something.  It has also had the unfortunate tip off the passenger seat of the car with contents spilled out all over the floor of the car.  And it made it entirely impossible to keep toddler hands out of the purse.  Not that a zipper would really have stopped them.  Several times I found myself at a store or in a drive through with a purse but no wallet.  Embarrassing to say the least.

I would like to have two separate pockets for keys and phone.  To prevent the whole keys scratching up phone.  And to make it even easier to grab one quickly without dropping the other out.

It would be nice if it was made of a sturdier material so as to prevent the pleather from flaking off.  Thus appearing "shabby." 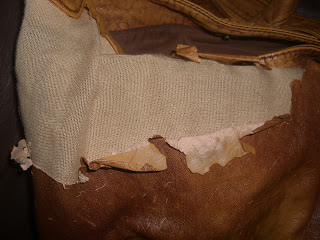 Other than that it's pretty perfect.

So, when my husband mentioned that I should get a new purse, I decided that if I could find one that met all of my criteria then I would consider purchasing.

Maybe for the exact perfect dream purse that would be the last purse I would ever buy purse, I would consider $50.

So, I started searching.

Did not have much luck in stores so I started asking my friend Google's advice.  And Google pretty much laughed at me.

Such a thing does not exist it said.  Cross body is no longer in fashion it said.  Your budget is a joke it said.

Finally Google found me one, 1, o-n-e single purse that met all my qualifications except one.

It was beautiful.  Large, green, so many perfect pockets, cross body bliss,

Guys, it was more than the brand new, full size freezer I got for my birthday.

A BAG in which to carry my copious stuff.

Have they lost their ever loving minds?!

Then a stroke of genius.

Oh, the great and powerful e-bay.  Bringer of good stuff.  A pretty much entire new wardrobe for someone who realized, when she transitioned out of her maternity clothes and back into her regular clothes and thought how great it would be to have a full wardrobe again, remembered she had the same thought when she transitioned out of her regular clothes and into her maternity clothes.  Right.  Need new clothes.  And that entire new wardrobe cost WAAAAAYYYYYYY less than that single purse Google had suggested.  THANKYOUVERYMUCH!

E-bay who found me the purse of my dreams.

Allow me to introduce you to my dream purse of awesomeness. 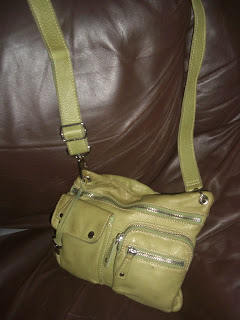 Two, count them. 1, 2.  Two front pockets.  One for keys and one for phone.  The keys pocket zips and the phone pocket snaps, allowing for super fast ease of ringing phone retrieval.  And there is a tiny zip pocket in front of the keys zip pocket where I could keep something small like chapstick, or in my case, receipts! 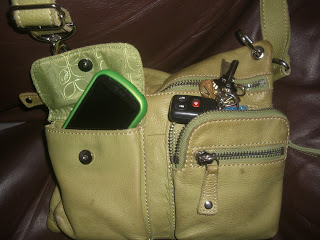 There is also a back zipper pocket for anything I want to separate out to find easily.  Like, my ipod. 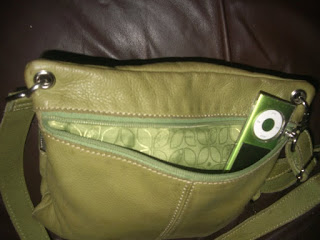 My oft neglected makeup still has it's home. 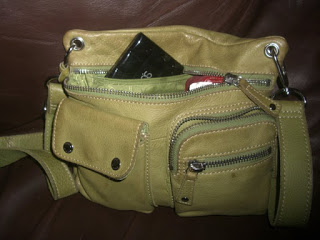 Can you tell what my favorite color is?

Also, it's leather.  So, it better never become shabby.  I will test this whole, "If you buy a name brand quality purse, it will last forever and will be the only purse you will ever have to buy" theory.

Ok, it might be a bit on the small side but I guess you can't have everything. 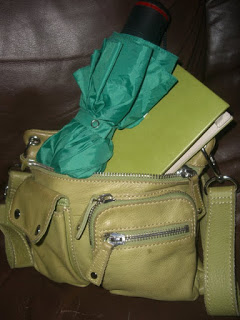 Won't be fitting my Nook or an umbrella into this purse.

Which makes it super light.  So light that I am frequently looking for my purse while carrying it.

There is a bigger version but it would be a little closer to my $50 budget than my $20 so I will stick with this for now.

Oh, how I love ebay.  And ebates.  'Cause I got ebates on everything I bought at ebay.  I mean really.  Is there anything better than saving a whole heck of a lotta money, and then getting cash back?

*This post may contain affiliate ads.  Read my full disclosure here.
Posted by NonDomesticMama at 1:11 AM