One night I guess the Princess had enough.  Instead of waking me up and telling me to go help the Peanut, she simply walked into our room and crawled into bed with us.  I figured she must have had a nightmare or something.  A few minutes later the Peanut started yelling for me.  When I walked into his room he told me the Princess was supposed to get me.  He had to go potty.

Wait... He had actually been waking up and sending her to get me?!

If he is awake then why isn't he just getting up and going to the bathroom by himself like he was doing for a year or more?

As it turns out, a tiny red light is to blame.

It's the little light in the motion sensor. 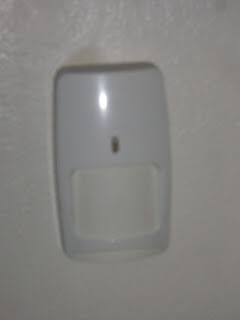 The one that lights up when you walk past.
He is afraid of it.

Now, this motion sensor has been there his entire life.  Day and night.  Why the sudden fear?  Why has he been getting up and walking past it for more than a year at night and not even noticed it but now is so terrified of it he would rather pee the bed than walk past it?!

Imagine my frustration when all this came to light.  Yes, that's right.  He has been waking up his poor sleepy sister, sending her to wake up his grouchy, sleep deprived, pregnant mother, just so I can walk him past the little red light.  And I have been falling for it for months!

We finally figured out why this is suddenly happening.  I have a little lamp on my desk.  For awhile we had been leaving it on at night.  We figured it would be good to have a little light in the house in case the kids did wake up in the middle of the night.  That way they didn't trip or anything on their way to the bathroom.  At some point this little lamp got unplugged.  It's kind of a pain to get to the outlet to plug it back in so I never bothered.  We really didn't think anything of it.  I guess without the extra light he finally noticed that tiny red light that has always been there.

Don't get me wrong.  I get it.  One second it isn't there and then suddenly, the minute you move, it lights up. Creepy!

So, we started leaving a light on during the night.  This seemed to be working.

Again the poor Princess was sent to get me.

Again there was her brother patiently waiting to be walked to the bathroom.

I pointed out that we left the light on for him.

But he knows the red light is there now.

During the day it's fine.

Well at night everything is more menacing, isn't it?

Posted by NonDomesticMama at 11:28 AM