Yesterday morning I woke up at 7:30am to the frantic cries of the Princess.  ...have to go potty!!!  I struggled to drag myself out of bed.  My husband rolled over and muttered something about waking him up after she was done.

We got to the bathroom and my daughter kept walking past it.  "I thought you had to go potty."  I yawned.  "No, my brother has to go potty."

We went into the bedroom and found him wiggling in the bed, still half asleep.  I roused him and he staggered out of bed and made his way to the bathroom.

"Thank you for telling me he had to go potty.  You can go back to bed now."

"But it's good mornin time.  The sun is awake.  I hungwy.  I want bweakfast."

It was worth a try.

We made our way into the kitchen, Zombie Mom style, and I put some waffles in the toaster.

At this point the baby was apparently squeezing my bladder with a vice so I went to check on the Peanut.  As it turns out, he had long finished and was checking out his handsome self in the mirror.

Our conversation awoke my husband who told me to go back to bed and he would take over.

A couple of hours later my husband woke me up to tell me he had gotten breakfast.  "Come eat before it gets cold."

Refreshed after my nice sleep in, I made my way into the living room.

As I rounded the corner, I was greeted with one of the sweetest sights I have ever seen.


My two beaming children holding gifts.  The Princess held out a bouquet of roses.  "Wook, fwowers!!"  She excitedly squealed. 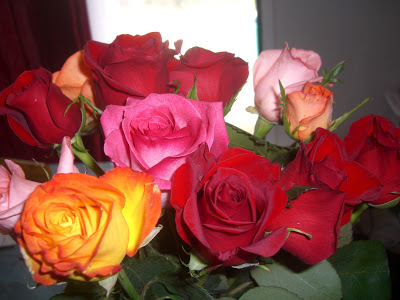 The Peanut was practically jumping up and down with excitement.  He held out a little box of chocolate covered strawberries.  He giggled as I took the box from him.  "I'm so excited to try them!!"  He happily exclaimed. 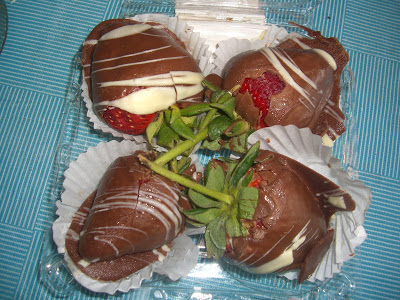 All week long he had been telling me that he wanted to get me chocolate strawberries for Mother's Day.  He saw them on a commercial and hasn't stopped talking about them since.  "Because I really want to try them."

I mentioned it to my husband one day.  We laughed.

We put the flowers in water and the kids smelled them and exclaimed how pretty they were.  We all pointed out our favorites.  "I really wanted to get you the rainbow one."  The Peanut told me.  My husband called from the other room, "It was rainbow because it was wilted.  It actually did look pretty cool but it was dying."

The strawberries went into the fridge for later.

Last night my husband asked if I was planning on eating the strawberries today.  "I'll wait until you get home from work."  He responded, "No, don't wait for me.  You guys eat them."  We laughed a little at the Peanut's enthusiasm to get me the strawberries.  Then my husband said, "I really wanted him to be able to get them for you.  I knew this would be a memory the two of you would share."

Today, the Peanut was on strawberry watch all day.  "Can we have them yet?"  "I really want to try them now."  "Do you want your strawberries yet?"  "I just want one!"

Finally after lunch I brought out the strawberries.  I pulled one out and put it on a plate for the Princess and the Peanut to share.

The Princess doesn't like strawberries so she just ate a little of the chocolate. 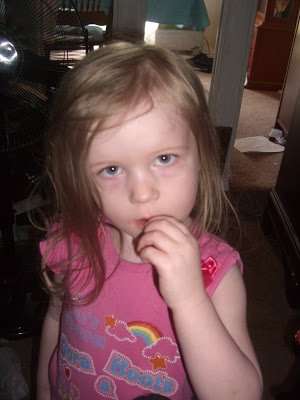 The Peanut happily devoured his strawberry. 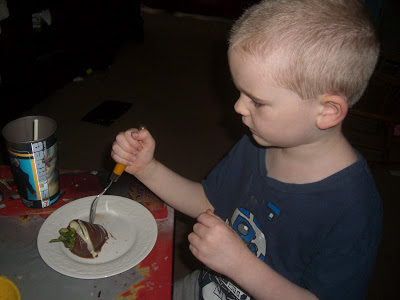 Afterward he declared it the best thing he ever tried.

Then he walked over to me.

"Mom, do you know what my favorite present was?"

Inwardly I answered the question.  "Um, MY strawberry?"

He smiled sweetly, "You."

Thank you to my precious, sweet children and the world's greatest husband for the best Mother's Day present ever!

The gift of a memory.

Posted by NonDomesticMama at 2:13 PM