If you are still reading this after that title you may consider yourself warned.  Read at your own risk!

You guys know those pregnant women who tell stories about their easy pregnancies and painless childbirths?  The ones who gain approximately 10 whole pounds their entire pregnancy and it is all in a cute little basketball shape on the front of their tummies.  They talk about "almost" having to resort to buying maternity clothes.  Labor lasted about 20 minutes and in one tiny push their perfect baby, who was born sleeping through the night by the way, came into the world.  Despite the fact that they were entirely un-medicated they amazingly felt no pain whatsoever.  The second the baby was born they sprang from their bed fully recovered and already back to their pre-baby size and shape.

You know.  The women that make you want to vomit and scream liar right in their faces.


I have a confession to make.

I am not one of those women.

I gained plenty of weight during both pregnancies.  There was no doubt from any angle whatsoever that I was pregnant.  And it was NOT all baby.  And it did not come off immediately.  Or ever.

With my second (full term) pregnancy I immediately began wearing maternity clothes so I could pretend that protruding stomach was me "showing early."

I had 24-48 hours of labor with both my kids and a c-section with each one.  And the epidural is my bestest friend in the whole wide world mmmkay thanks.

Ok.  You got me there.  This is where I fall into the category of, pregnant woman all other women who have ever been or will ever be pregnant, want to slap.

I know.  And I apologize.

You see with my first two pregnancies I never really had what could be entirely described as morning sickness.  At least not by anyone who has ever experienced real morning sickness.  It was more of a vague feeling of nausea for about the last week of my first trimester and a lack of appetite.

Enough of a lack of appetite that I managed to lose 6 whole pounds in my first trimester of my second pregnancy.

Each time around my doctor gave me a prescription for an anti-nausea medication.  Just in case.  I laughed it off and never bothered to fill it.

So, this time around.

I did everything the same.

I got the little prescription slip.  And I put it away in a box somewhere.  "Just in case."  Not that I would actually need it.

Things were a little different this time.  Instead of waiting until the last week or so of my first trimester, that vague feeling of nausea started right at the very beginning.  Oh well.  I had been warned.  "The third one will get you."  "Third time is the hardest," and so on.  So I would maybe lose a little more than 6 lbs this time around.  As of last week I had lost a grand total of 10lbs.  But I fluctuated.  Still the nausea was pretty light and only in the evening.  So I skipped a few dinners.  No biggie.  I've done it all before.  Nothing new here.

Last week my parents were in town visiting.  My husband had injured his back over the weekend doing lawn work and was pretty much confined to bed.  I was a little sick with this allergies/sinus stuff that I always get when I am pregnant.  See, I'm not entirely without my share of the pain!  And I was just exhausted with all the running about and being pregnant etc.

But on the bright side, for the last few days of the week I had no nausea.  I patted myself on the back that I had gotten through yet another first trimester of pregnancy unscathed by the horror of morning sickness.

I even told myself that maybe all this sinus stuff was God's way of sparing me real morning sickness, since I didn't have to smell anything with my super oversensitive pregnancy nose while feeling queasy.

God is laughing at me.

On Saturday, after my parents left, I took a nice long nap and then a long shower hoping to clear out my sinuses.  If I could just get the ability to breath back I would be 100%.  Ready for the fun, easy second trimester.

My sister in law came over for a bit with her kids to hang out.  My husband was up and about again starting to recover.

When my sis-in-law got up to leave I walked her to the door and we stood there chatting for a bit.  Her kids were waiting in the car.  I was later informed by my husband that our little doorway chat actually lasted an hour.  Oops.

As we chatted about this and laughed about that I suddenly found myself shaking from head to toe.  My body just went weak.  I clutched at the wall for support to keep from collapsing.  My heart was racing and I was overcome with a feeling of not so slight nausea.

I informed my sis-in-law that I was feeling a little sick.  Understatement!

She told me to call her in the morning if I needed her to take the kids for the day.  An offer I ended up gratefully accepting.

She left and I managed to stumble into bed.  All night I tossed and turned.  Or more accurately, I mostly lay as still as possible because any slight movement caused my stomach to violently toss and turn.

I managed to get my heart back to a normal speed by breathing deeply.  As it turns out, when you can't breath from your nose, and you spend an hour talking and laughing between quick gasps for air, the baby starts to notice the lack of oxygen.  Simple solution.  Breath.

The next morning my stomach continued the flip flop game.  My amazing saint of a husband managed to get up and take care of the kids all morning before calling his sister to take them for the rest of the day.  He then waited on me despite the pain he was in from his back injury.  I will be eternally grateful, guilty and indebted to him for those hours.

Sometime in the afternoon my husband went to get lunch.  I was feeling a bit better and decided I really should try to eat something.  Yogurt sounded like a nice, easy on the stomach, light meal so I told him to get me a little fruit and yogurt parfait.

Halfway through I realized it was a bad idea.

Back into bed I struggled to remain perfectly still and will my stomach to sit still.

I found myself running for the bathroom.

I'll spare you the gory details but let's just say I can no longer count on one hand the number of times I have thrown up since the "incident that left the grape juice stain on my parents hallway carpet when I was 12."

Did I mention that I am NOT one of those people who "would just rather throw up and get it over with?"  Give me the persistent nausea over the actual throwing up, please and thank you.  Throwing up does not make it better.  A million trillion times worse.  It is to be avoided at all costs!  Mind over matter!!

At this point, my saint of a husband, drug himself to Target one hour before the pharmacy closed and filled my anti-nausea prescription.  As it turns out, if you wait until you need it to fill it, it will be too late.  Lesson learned. 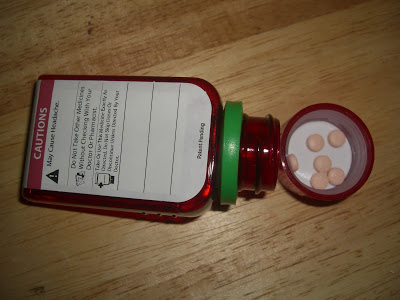 Those little magical pills have quickly become my bestest friend in the whole wide world.  Ya, I can have more than one bestest friend!  Mmmkay?

I have had to take a few of them since the "indecent that made my bathroom smell like a yogurt parfait."  And thankfully they truly are magical.  They tame my flippity flopping stomach into a vague feeling of nausea.  As it should be!

Bringing me to a grand total of 14 this pregnancy.  Which officially brings me back to the weight I was pre-second pregnancy.  No worries.  I'm sure I will find every one of those pesky little pounds (and more) just as soon as this morning sickness passes.

Posted by NonDomesticMama at 3:37 PM