Have I Mentioned I'm a Geek? Dallas Comic Con

Yesterday my family and I attended the Dallas Comic Con. 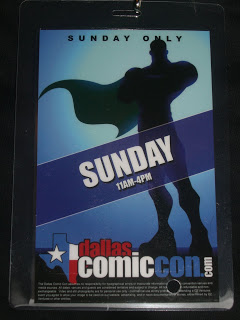 Ok, you can quit the eye rolling.

Yes, I really know how much of a geek I am.

No, I did not dress up.  Unless you count the Superman shirt and the "mommy costume."

For those of you who have never had the opportunity to attend a comic book convention (and I am sure you would have gone if at all feasibly possible) allow me to give you a glimpse into the excitement and wonder that is Comic Con! 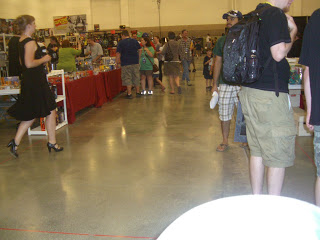 Now, just in case you are thinking that only weirdos attend such events I can assure you there are plenty of normal people there.  Even some celebrities.

Like have you ever heard of Stan Lee?  Or Carrie Fisher?  Or Leonard Nimoy???  Yeah they were there.  Ok, Leonard was only there on Saturday and we were there on Sunday so he wasn't there the same day but still . . .

They weren't the only celebrities to attend.  The convention was full of famous celebrities wandering around mingling with the commoners.

Have you ever browsed through stacks of comic books only to realize the person browsing next to you is actually . . .

Or admired a Superman figurine only to realize the real deal is right in front of you?
Waited for an elevator with a Stormtrooper?
Plotted and schemed world domination with Harley Quinn?
Witnessed the epic battle when Batman puts a stop to Harley's evil scheme?
But all those celebrities pale in comparison to the guy we found sitting quietly in the back corner of the room.

My husband and I just stood there and gawked and giggled.  Like little children we huddled together whispering and pointing.  Trying to get up the nerve to approach him.  "Oooohh!  He smiled at us!"  (He totally did.  Probably because we were the only idiots just standing there openly staring at him . . . )  We just couldn't do it so we left and walked around for a few hours.

As the end of the convention grew closer and closer I did my best to convince my husband to go over there.  This was his one chance.  He could not pass this up.  He was seriously star struck.  Finally he took a deep breath and agreed.

Together we walked back over to get a picture with . . .

Right there in person.

As if that wasn't enough, I found out one of my all time favorite celebrities was there too.  It took us some searching.

A Dalek
Then another Dalek

The second Dalek was kind enough to direct us.

And finally . . .
For real!  The actual Tardis right there in person.
So, we took some pictures.
And then, I went for a ride.
I had so many adventures and traveled to so many places and times.  But that is a story for another day . . .

When I returned no one even realized I had been gone!
Yup, there was something there for everyone.

After it was all over we packed up two excited exhausted kids and headed . . .

to church.  It was Sunday.

Ya, we didn't have a chance to change clothes.  When I expressed some concern over our appearance my husband reminded me of the time that we went to Mass and saw a Stormtrooper in the congregation.  In full armor.  Well except the helmet of course.  It's disrespectful to wear a hat in church.  We were attending a Star Wars convention at the time and the church was directly across the street.

At least my kids didn't act up and draw unnecessary attention to us.  Unless you consider acting like the mole in a whack-a-mole game drawing attention.  I'd be willing to bet we had our fair share of Death Glares.  At least my son was calm.  He was passed out on the pew.

No one seemed to notice our superhero t-shirts.  I was tempted to announce to everyone that we were dressed that way because we just came from Comic Con.  But I wasn't sure that would really make things seem any better . . .

What?  I told you I'm a geek.  Stop being all surprised.

Wait.  You're not at all surprised?  Should I feel insulted?

Don't worry.  I will be sure to fill you in on all the exciting details when I attend the Star Wars Convention in October.

While you are waiting for that you could always check out my husband's podcast.  See, as you can probably guess by now, he is a geek too.  He reviews Star Trek comics.  How many geeky words can you find in this statement?  Star Trek Comic Book Review Podcast

Posted by NonDomesticMama at 4:03 PM