There is a wall in my house I like to fondly refer to as the problem wall. 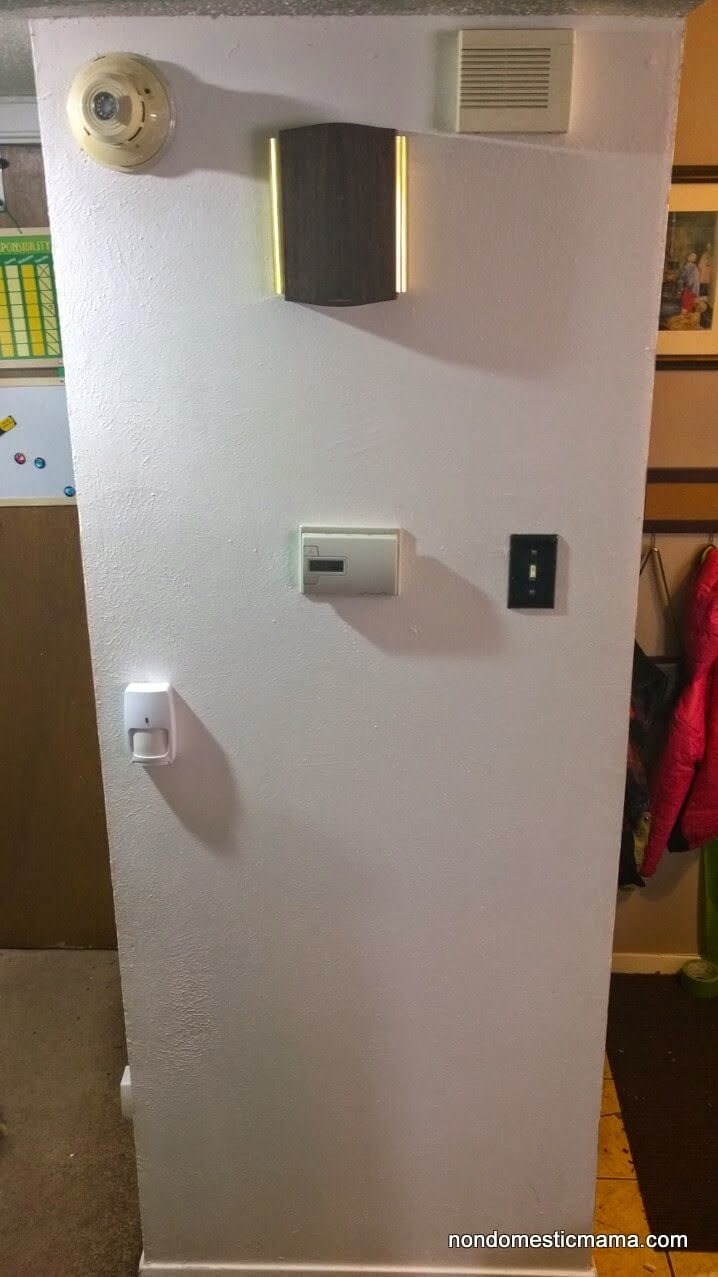 This ugly little wall is nicely located right between the front door and the laundry room door.

The designers of this house put a lot of thought into the location of all the eyesores.  Where should we stick all these ugly things?  Doorbell speaker, alarm speaker, thermostat, smoke detector, motion sensor. And not only is the stuff not pretty, it's about as ugly as possible.  The alarm speaker and motion sensor are newer.  Yes, we could put this stuff around the corner but this wall already looks ugly.  Let's just add to it.  Ahem.

The smoke alarm is not even functional so I should really remove it.  Even though I know the wires leading to it aren't live, (had them checked) it still makes me nervous to just take it off and have those wires floating in the wall.  So, I will wait until someone who knows what they are doing can remove it.

Let's not even mention the fact that the thermostat is crooked.  Crooked.  For really.

The doorbell is an... antique.  I am not totally in love with the style. 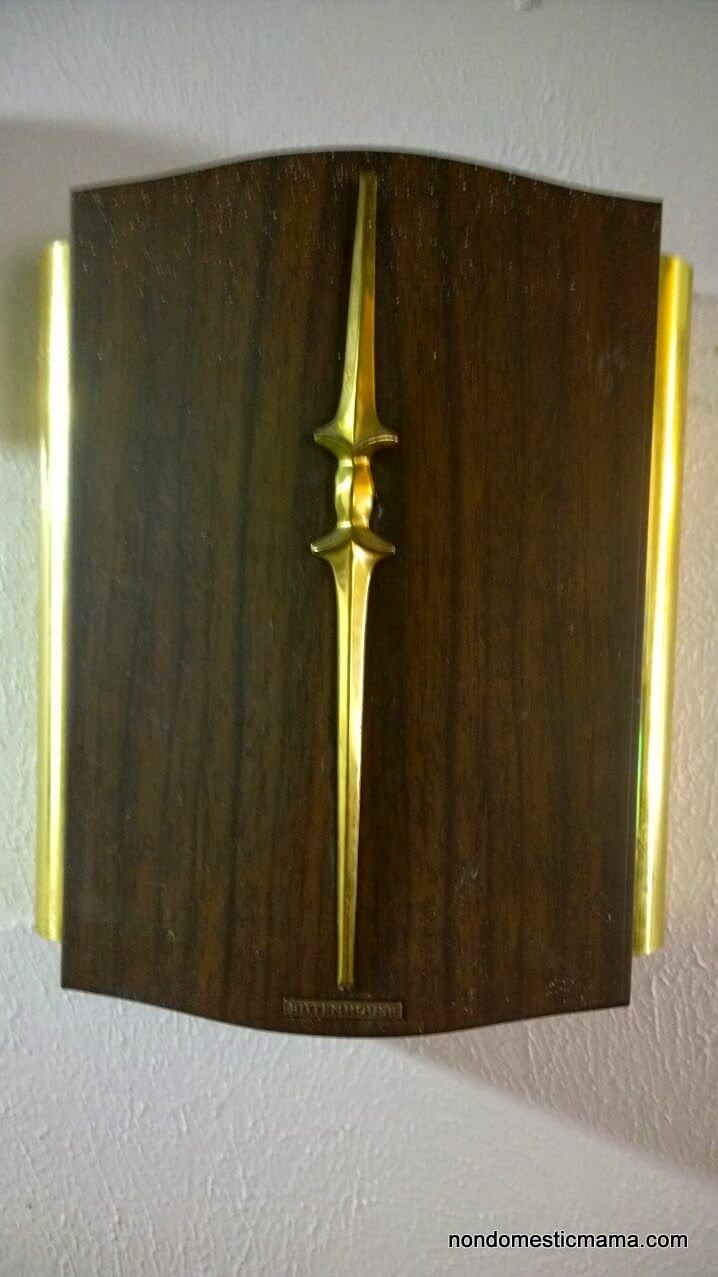 The first thing I did when we moved in was try to eliminate all the brass everywhere.  I did remove the decorative thingy off the front and was considering painting the brown part.  I also removed the side chimes and discovered they are in fact functional so back they went. 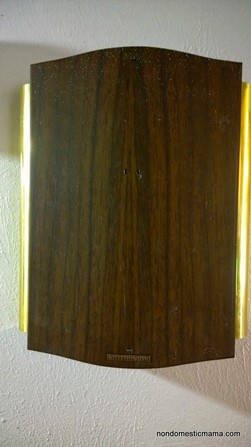 After spending much time/energy/angst trying to change it, I decided to just embrace it and work with it.  After all, it is part of the history of the house and would a plain speaker box really be any prettier?

Plus, brass is back in!  Bring back all the gold things we finally managed to get rid of!!!  Right?  I'll never fully understand trends.

At first, I fixated on covering all the uglies but I was worried about the functionality being compromised.  I also worried that covering them would just end up looking like I had covered something up.

Then as I was browsing gallery walls on Pinterest, (I have always had a bit of an obsession with gallery walls) I realized the ones I loved the most had a mixture of frames and other oddities.

So, if I surround the ugly stuff with pretty stuff maybe people will notice the pretties and ignore the uglies?!

Obviously I NEEDED to run right out and start buying stuff to hang on my wall!

Except that wasn't really in the budget.  So, I decided to work with what I had and I could always add to it later.


First, I painted the wall hoping the off white colors would blend in a little better with a taupe than against white.  Really just an excuse to paint. 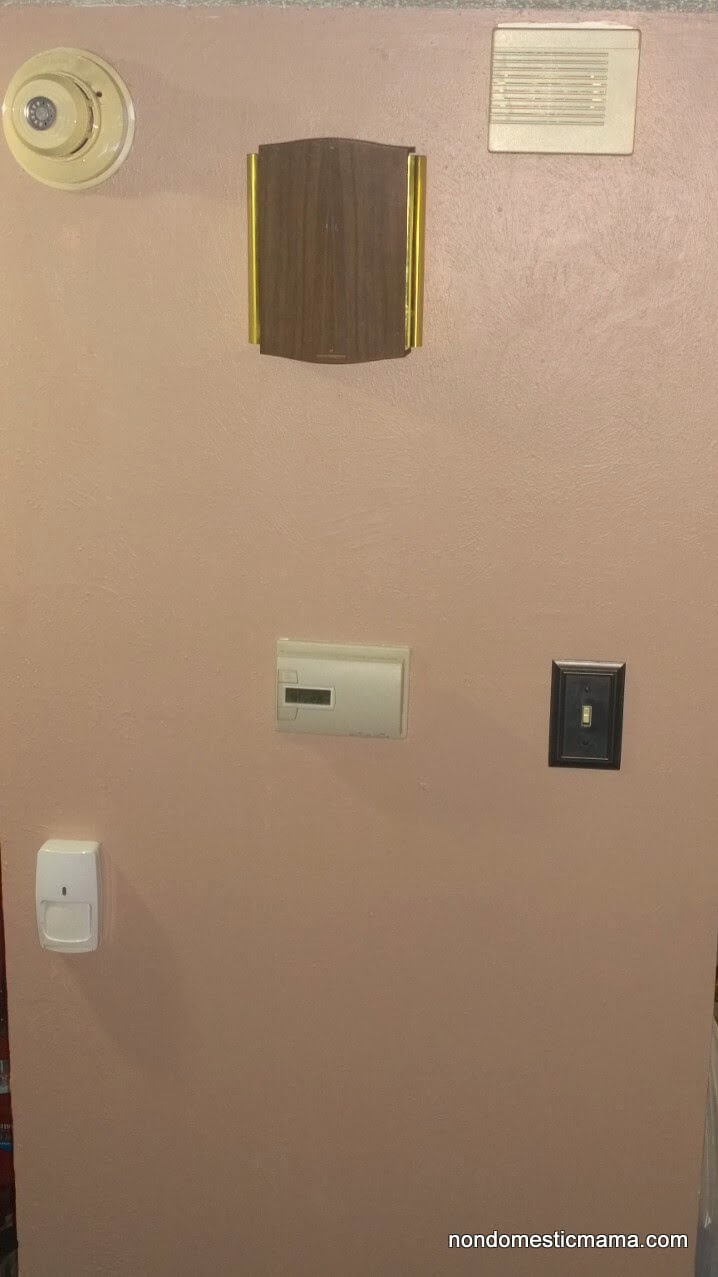 I started my gallery wall by hanging this little framed quote.  It had sort of been floating around the house looking for a home before that.  It never seemed to fit anywhere so I kept moving it.  I really liked how the gold tones in the frame go with the brass in the doorbell.  I even added the brass front piece back on. 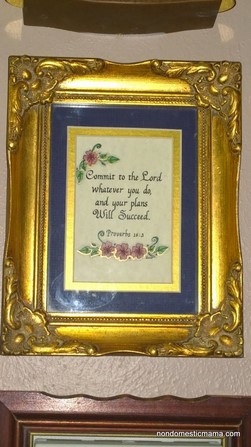 With that inspiration I started looking for something else with the same gold tones.

I ended up moving this picture in from my daughters room.  It was in my sisters room while I was growing up and my mom gave it to me when they redid that room.  I loved having it in my kids room.  I always associate this picture with the Angel of God prayer we say before bed.  But now the Peanut has his own room, it isn't fair for her to have it.  Right?  So it will be better in a common area where everyone can enjoy it.  Best of all it went with the gold theme I had going. 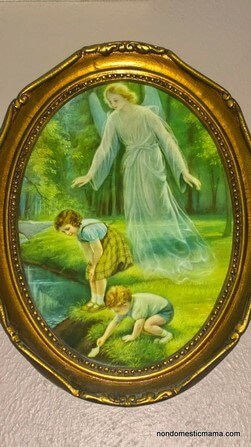 With that I was out of gold/brass.  But I did have a little brown vintage frame that I tried out around the thermostat on a whim. 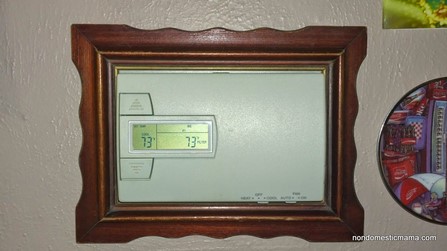 Fits like a glove.  Not even fastened to the wall in any way and it hasn't budged.

Totally random looking and I was pretty sure my husband would hate it but to my surprise he said he liked it.  The thermostat seems to function fine so the frame stayed.

Scrounging things up around the house, I came up with a few more items.  There was a lot of trial and error.  I would hang things up, wait a day or two, decide I didn't like them, either because they didn't properly fit the space or they just didn't look right or I liked them better somewhere else, and then I would go off to find something different.

Finally I found a combination I liked.

A Nativity puzzle that hung in my bedroom during my childhood.  I had it put away with some Christmas stuff so I was glad to find a place for it. 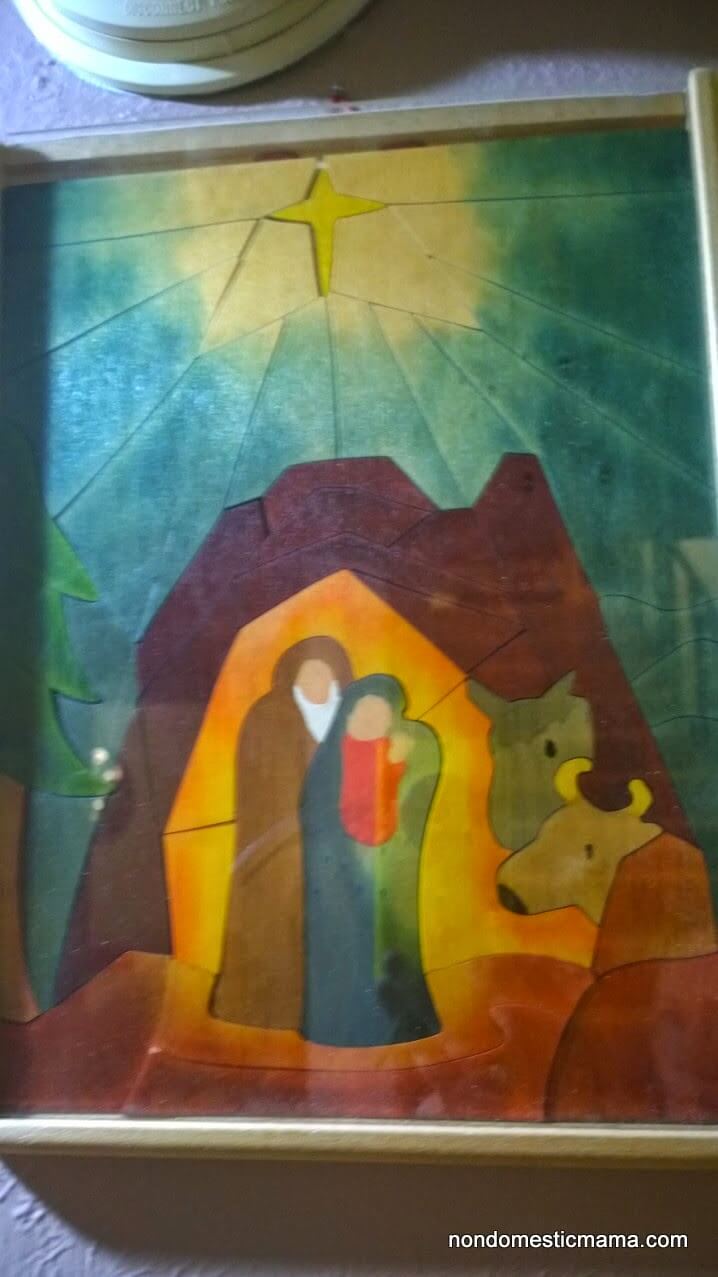 The Crucifix we bought for Matthew's funeral. 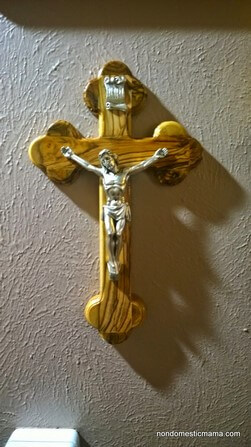 This was also packed away and I had planned on hanging it in my bedroom but we bought it to match the one hanging next to the front door so I kind of like that they are near each other. 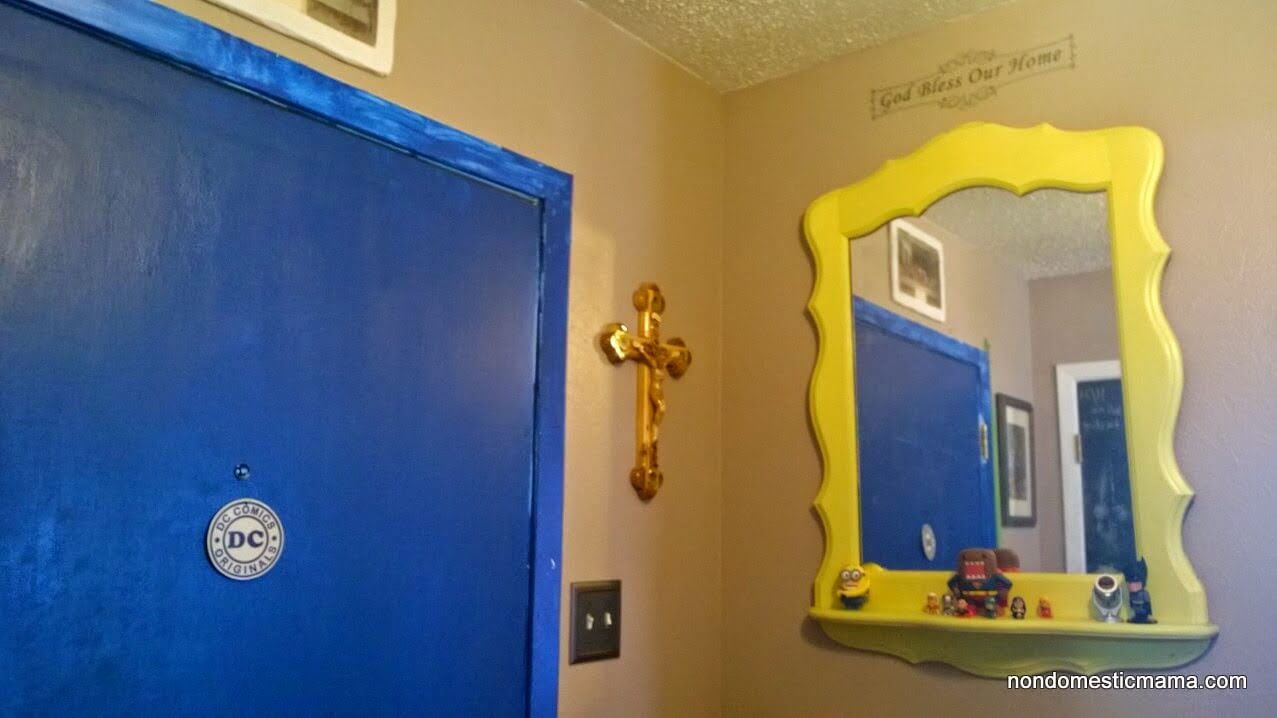 It also puts it near the stairway where the "Matthew Wall" is which is fitting as well. 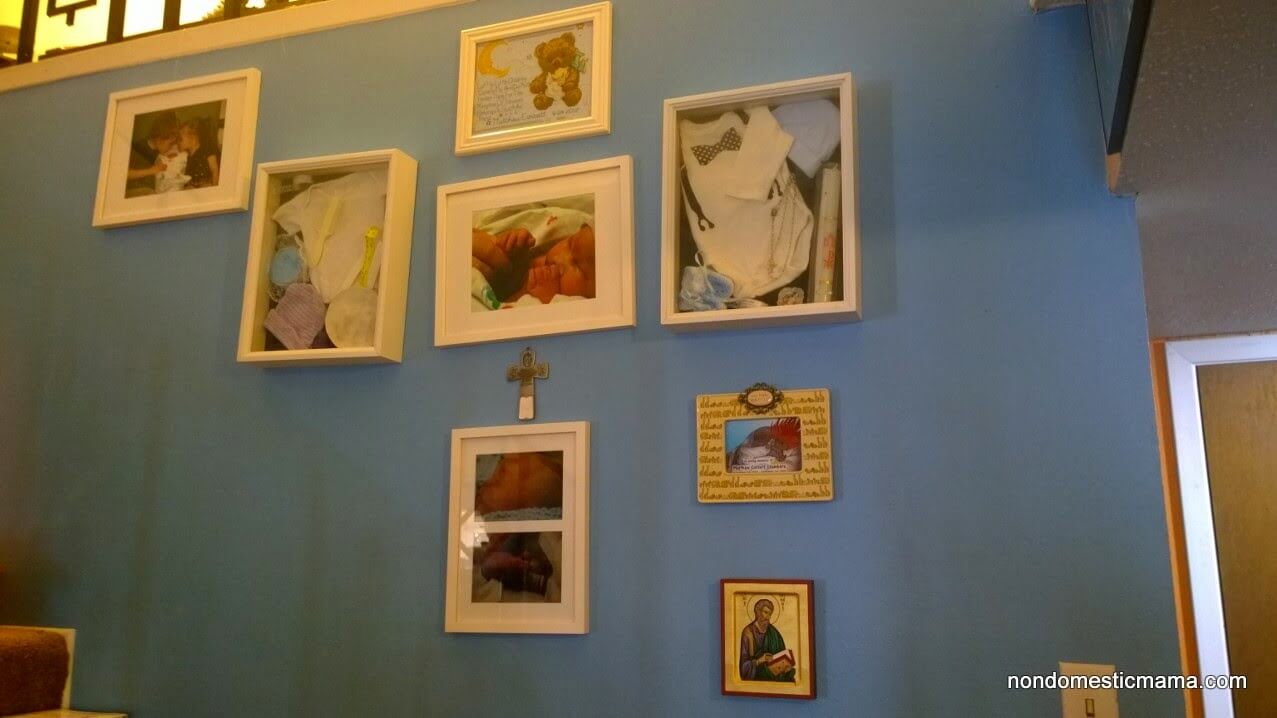 I had a hard time filling one awkwardly shaped space so I found a program from a friend's art gallery exhibition. 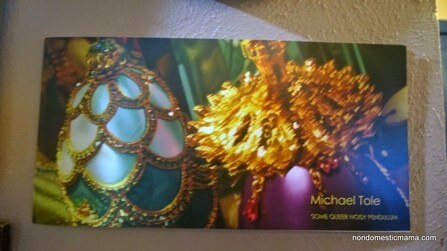 And then, to top it all off, (get it?) a little teapot on top of the doorbell.  Because, why not? 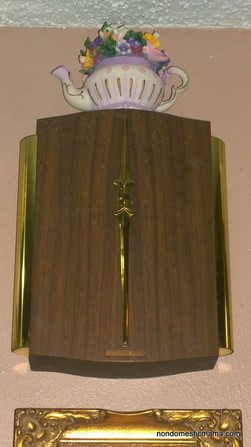 Sadly, while I was taking the teapot out of the cabinet it was in, I dropped it and managed to break a little glass plate my sister bought for me in Europe.  Sadness!

I am glad that I didn't run out and buy a bunch of random new stuff to put up on the wall.  As fun as that might have been.  I had so many things that I love just packed away and now they have a nice home.

And I think I really like the doorbell now.  It fits rather than being a huge attention seeking item on a big empty (except for the uglies) wall. 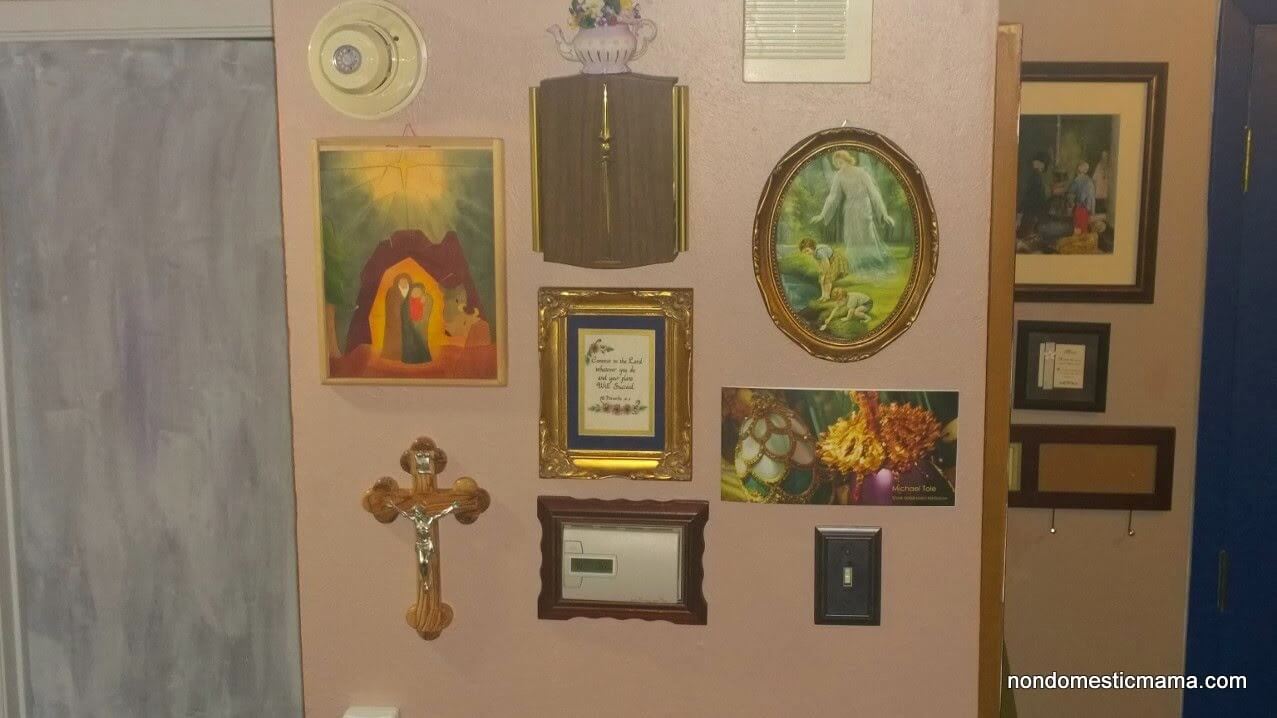 The gallery wall looks so much better now than it did before.

You almost forget to notice the uglies!
Posted by NonDomesticMama at 12:32 PM