Matthew Part I: A Birth Story

It's hard to know how to even begin to tell his story.  How do I begin to put into words what is in my heart?  It was really one of those, "you had to be there" times.  But I want to share his story.  Because part of being a mother is knowing your child is wonderful and perfect and wanting the entire world to know how wonderful and perfect he is too.  Before the details start to fade and blur.  I want to introduce you to my 36 hour miracle.  I want you to meet my precious Matthew.

I guess I will start at the beginning.

Friday September 21st was the Princess's 4th birthday.  We took her to Legoland.  Afterwards we took her to the toy store to spend some birthday money she had been given.  She proved her natural shopping abilities by scoring a few deals and walking out of the store with over $70 worth of toys for $30.  It was a happy day.

Little did I know that there would be no more preparations.  No written birth plan.  A half packed bag.  And when all was said and done the list of people I owe a life debt to has increased significantly.

On Sunday September 23rd we went to church.  After Mass we walked around the church festival a bit.  Then we headed home.  I had a few contractions throughout the day.  Just tightening, no real pain.  All the same they had me a bit worried.  See, I never had Braxton Hicks contractions with my other pregnancies.  About a month ago I had contractions.  They were upper abdominal and clearly different than anything I had ever had before so I didn't worry about those.  These however seemed more like "normal" contractions.  So I did my best to relax and kind of hung out in bed all day drinking water and playing a lot of Spider Solitaire.

As the day went on they became more frequent.  I tried to tell my husband not to worry.  This was totally normal.  Inwardly I was starting to panic a bit.

Bedtime and I tried to get some sleep.  But the contractions were becoming more frequent.  And more painful.  I would start to doze off only to be awakened by a contraction.  I started to time them.  They were coming every 15 minutes or so.  I decided to take a shower.  Maybe that would relax me and they would stop.  Me stressing about them was probably not helping matters any.

I took an hour long shower.  Only had one contraction the whole time.

Good.  Now maybe I can relax and sleep.  By morning time they will have stopped.

I moved to the recliner.

At this point I was timing contractions by how many Hail Mary's I would say during one.

I was panicking.  It was too soon.  My son would have enough problems without being premature too.  I was only 35 weeks.  I just needed at least two more weeks for him to be full term.

I thought of Mary on that road to Bethlehem.  Was she afraid?  Was she in labor as they searched for a place to stay?  Did she fear having no place to give birth.  That her child would be endangered by exposure to the elements?

Was my son about to lose any tiny chance he had at even a few hours of life?

"I'm not the only one whose plans will be affected!  There are lots of people who have made plans to be here.  Days off work have been taken.  Hotels have been booked.  They want the chance to meet him.  This is not the plan!"

And God answered, "It's not YOUR plan."

These contractions were exactly the same as the contractions I had right before my water broke with the Princess.  Fluctuating between 5 and 10 minutes.  Same pain level.  I knew.  This was real labor.

At 7:30 am my husband woke up.  We decided to call the doctor and head to the hospital.


I was just praying they could give me something to stop the labor.  Maybe we could still give him some time.

I frantically threw all the things I could think of into my half packed bag.

My husband called our dear friend Melissa, who has already been such an incredible help to our family.  Yet again she found herself with no head notice, headed to the hospital to watch our kids.

So, I found myself at the hospital, hooked up to monitors and still hoping against hope that the contractions would stop and I would just be able to go home and wait another month to meet my precious Matthew.

Of course, the monitors did not register my contractions.  No matter how painful or how strong, the monitor barely saw it.  It was the same with my daughter.  Right before I was sent home.  Arriving home to have my water break and head right back.  Spending the rest of the night in labor with contractions so strong I was screaming through them, yet still nothing on the monitor.

Let me tell you how much faith I put in the monitor.

The doctor basically told me that they would check to see if I was dilating and if not I could go home because it wasn't really active labor.  Never dilated past a 3 after 48 hours of labor with my daughter so you can guess how much faith I put in that.

I wasn't dilated at all.  It looked like I would be going home after all.

I was pretty sure I would arrive home only to have my water break and turn around to go back.  By that time we would be in rush hour traffic.  In construction.  On the worst highway in the area.  It would probably take us an hour and a half to get back.

Oh, they were also very worried about my blood pressure.

They were testing me for pre-eclampsia and talking about putting me on bed rest.

The tests came back negative.  They decided to see if I had made any "progress" in the last hour.

Then the doctor presented us with the choice that was not a choice.

We could go home and wait.  See if maybe my labor slowed down.  After all I could be a 3 and not progress any further.

Of course a day or a few more hours would not make a difference in his development.

And if I got home and had to come right back it would be in traffic.

And those contractions were starting to become quite painful.

Also there was a danger to me if I went into hard active labor.  The risk of rupture is low but it's still a risk.  And we know how well we do with statistics.  I mean the chances of having a baby with Trisomy 13 is way lower than the chances of uterine rupture.  If I did rupture that would put Matthew at further risk.  And what if it happened while we were stuck in traffic?  Also when I was laboring with the Princess I developed a "window" and was close to rupturing.  So I had been down that road before.

So we made the choice that was not a choice and decided to proceed with the c-section.

Family started heading in the hospital.

Matthew's godparents were 3 hours away.

My parents, brother and sister in law were 5 hours away.

Our parish priest was contacted.

And prayers were being prayed.

Shortly before my epidural was ready, our priest and another friend from the church arrived.

At that moment I broke down a bit.  This was really happening.  I was so relieved that they were able to make it.

I knew Matthew would be baptized no matter what but it was still a relief to have Fr. Dominic there.  Something of the original plan was salvaged.

He offered to be in the operating room so that he could baptize Matthew right away and I gratefully accepted.

My friend Lisa arrived and she was also given permission to be in the operating room to take pictures.

My epidural was placed.  While it was being put in I was having contractions back to back.  There was barely any break between them at all by this point.  Pretty sure that's what you call active labor.

And then it was off to the O.R. to deliver my little "Matt-man."

I had been told "my nurse" wouldn't be there because it was her day off but she arrived just in time.  Huge relief.  She is amazing.

As they prepped me for surgery the shaking started.  Usually I get the shakes after surgery when I am being sewn up but this time they started right away.  Nerves or a reaction to the epidural or most likely a combination of both.  I tried to relax.  All I could think about was that first breath.  Would he take that first breath? 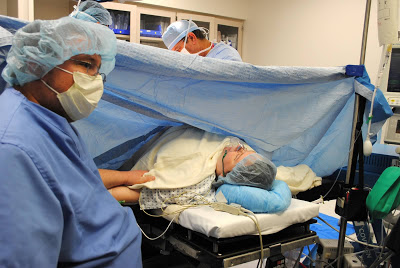 The doctors let us know that he was coming. 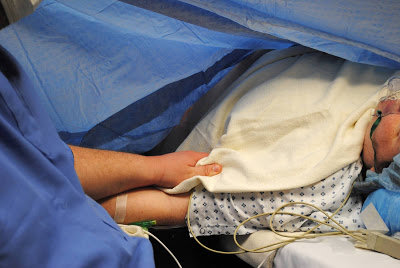 I know we both held our breath. 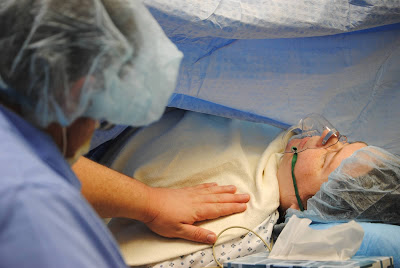 And that's when we heard it. 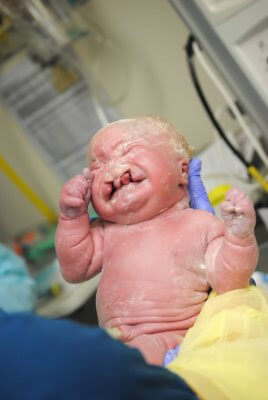 That little squeaky newborn baby cry.  And we both cried our tears of joy.  He was breathing!  I would get the chance to meet my son.

Matthew Corbett was born at 4:50pm on Monday September 24th.  He weighed 6lbs 3oz!  Pretty healthy for a month premature! 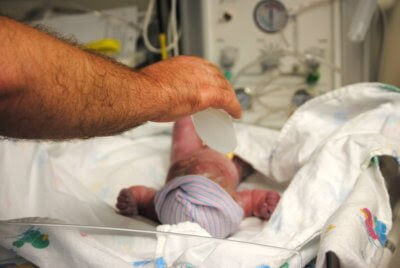 And Fr. Dominic didn't waste any time.  Matthew was baptized the second he was laid down.


Before I formed you in the womb I knew you,
before you were born I dedicated you,
a prophet to the nations I appointed you.  Jeremiah 1:5

Posted by NonDomesticMama at 4:50 PM