My only excuse for the garbled bunch of nonsense you are about to read is that I am a bit tired.  Not sure what my excuse is every other day...

I have wanted to write a Five Favorites post for a long time now but never quite got around to it.  Because I am a procrastinator to the extreme.  I procrastinate doing things I WANT to do.  Pretty bad I know.  Love reading everyone else's Five Favorites and keep thinking, "That would be an easy post to write.  I can come up with 5 things I like."

Ok, here we go.  Five random things that I love at this very moment.

1.  Mom's Night Out.  The movie.  Haven't seen it yet but I love the trailer and am determined that it is going to be as wonderful as it looks. 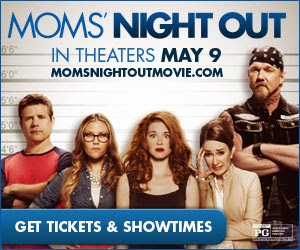 Plus, it was co-written, co-directed, produced by a homeschooler.  Awesomeness!!

AND Patricia Heaton is in it.  Love her!

2.  Patricia Heaton.  She is so funny and talented and beautiful and awesome.  And Catholic.  Totally cool.  She always picks the best roles.  I think she gets that it's possible to not have everything totally together but for things to still be good.  (I know that doesn't make total sense.  Not totally together here.)  Though I suspect in real life she has things at least somewhat totally together.  She is also in one of my all time favorite TV shows.  The Middle.

3.  The Middle.  Seriously people.  Do the writers of the show spy on us or what?  A show about a totally "disfunctional" family that are maybe more functional than they give themselves credit for.  Frankie is my favorite TV mom ever.  She is always so tired and frazzled and defeated and chaotic yet she just loves her family and wears herself out doing things for them, all while berating herself for not doing enough.  (I know that was a run on sentence so I threw a comma in there.  You're welcome.)   It's just so real.  When they had to hold the dishwasher shut with the broom handle while it was running to keep it closed.  Yes!  And when they finally got a new dishwasher but it wouldn't fit in the space.  Nice!  And when Mike gave that awesome speech about how the house hates them.  Truth!  And when someone turned on the oven and burned the quilt that was stored inside because no one ever cooks.  HA!!!  The toenails in the chip bag.  Dying!  It also happens to be one of the very few shows on TV that I can let my kids watch.

4.  Mitzi's new blog.  Coquades Galore  Just discovered it today and I am super excited.  She is already making me laugh.  Especially when I read her description of me in her Blog Roll.  (And her introduction to the Blog Roll.)  I had totally forgotten the escalator until she mentioned it.  So I guess it didn't scar me for life after all.  Though I am still convinced it is somehow my destiny to die on an escalator and if I just avoid them I might live forever.  Um.  Right.  Back to Mitzi.  We were friends in college and then roommates after college (she was an awesome roommate) until she decided to move far away JUST to get married to her love.  Whatever.  I guess I either need to get over it or she needs to come to her senses and relocate her family right back to Texas where everyone belongs.  Unless they are mean.  Then they can live somewhere else.  But Mitzi isn't mean so she needs to be in Texas.  Mitzi also inspired yesterdays blog post.  And when I say inspired, what I really mean is "gave me an excuse to ramble on about Doctor Who to a captive audience."  That's almost a direct quote from my husband.  He's right.  I tried to add Coquades Galore to my Blog Roll but it is being mean to me and refusing to work.  Mean Blog Roll should just move away to somewhere that isn't Texas.  Or work.  Work would be better.

I just wrote an entire post without including any pictures.  So.  Here. 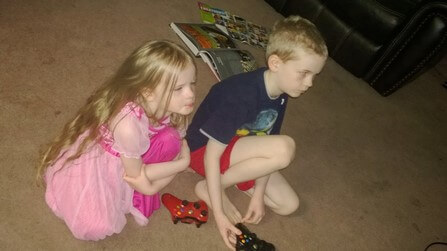 In their pajamas at 2pm.  Playing video games on a school day.  (School work was finished first.)  Pouting Princess.  No idea what she is upset about other than she got up too early this morning.  This is what they were doing while I was writing this.  Mother of the year!


Linking up my (very rambley) post with Five Favorites at Moxie Wife.

*This post may contain affiliate ads.  Read my full disclosure here.
Posted by NonDomesticMama at 2:03 PM