I was greeted with this sight. 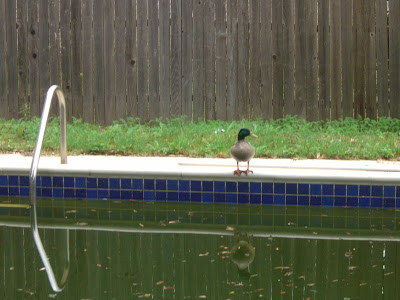 Now, there have been several times in the past that I have wondered if fighting with the pool to keep it clean and chemically balanced is really worth all the effort.  I mean maybe we should just buy a few fish and some lily pads and pretend it really is supposed to look like a slimy pond.

Well, this was the point of no return.

If Mr. Duck decided our pond pool was his own personal playground and invited all his ducky friends to join him, we would just never get it back.

I eyeballed Mr. Duck.  He flippantly ignored me.

How to rid the pool of Mr. Duck?  This was going to be a delicate operation.

I consulted my best friend, Mr. Google, for answers.  He laughed at me and responded encouragingly, "You're screwed."

I frantically texted my husband who responded helpfully, "Shoo him off."

Um.  Right.  Like I need to be attacked by a duck.

I briefly considered sending the dog out but the last thing I wanted, aside from a pond full of ducky poop, was to be cleaning duck guts out of the yard.

I decided to stand in full visibility, with the glass door between us for protection, and call the duck's attention to the fact that there was a very dangerous woman hanging out at this pond.

He responded by giving me his best, "you don't threaten me and in fact I don't even know you are there.  You might as well be a tree." look.

Taking a deep breath, I stepped out into the yard.  Clutching the door and preparing to duck (get it?? Ha! I'm hilarious!!) back inside at the first aggressive move by Mr. Duck, I made myself look as threatening as possible.

He responded by giving me his best, "you don't threaten me and in fact I don't even know you are there.  You might as well be a rock." look.

I got a text from my husband.

Because just then the worst possible thing happened. 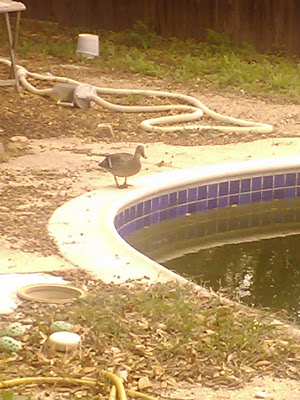 And she was looking to become Mrs. Duck.

"And now it's a freaken party."

They both jumped straight into their pond.

Mr. Duck started prancing around and flipping those gorgeous curly tail feathers of his.

I started to reason with her.  Giving her my best mom speech, I tried to convince her that she was not ready for this.

"Honey, he might be a great specimen of duckhood.  Heck, he makes MY heart go pitter patter.  But he is only after one thing.  You need to be the responsible one.  Think of those future eggs.  Those little chicks.  Because it will be on you to protect them.  Do you really want to choose this spot with the big threatening human person.  And there is a dog.  You don't want those babies near a dog!  And I have babies of my own.  Sure, they would love it if we had ducklings around.  Love it a little too much.  You don't want my babies chasing your babies around.  You don't need that kind of stress.  He isn't going to think of the consequences of his actions.  You need to."

She pondered my words uneasily.  Looking from her Ducky-boyfriend to me and back again.  Waging war between temptation and common sense.

She will be a good mom one day.  Just not in my yard please.

My husband sent me another text.

I could see her weakening.  Mr. Duck's tail feathers were flipping frantically.  "Ignore her."  He told her.  "She doesn't understand.  This is true love.  She just doesn't want us to have any fun.  Do you really want to miss out on all THIS?!"

I decided to send out the dog.

He came running to the door.  Took one look at the ducks.  Turned tail and ran back into the house.

There are two reasons I have a dog.

1. So I never have to vacuum.
2. To chase away invading ducks.

"Dog, your usefulness is hanging on a thread here."

Finally I decided to take matters into my own trembling hands.  I grabbed a broom and ran towards the pool screaming like a banshee.

The ducks calmly swam to the other side.

Undeterred, I continued my insane charge around the pool.

They swam back to the far side.

I got smart and held the broom out across the pool, blocking their retreat.

Finally, Ms. Duck had enough.  She took off into the air followed closely by Mr. Duck.  "Baby wait!  We can work this out."

I watched them up in the air, circle around a few times.  He, obviously trying to coax her to give it another try.  Her, looking at the crazy woman with the broom.  Not going to happen.

Away they flew, not to be seen again in my yard.

And that's how it's done, cowardly dog.

Posted by NonDomesticMama at 2:41 PM