It has been way too long since I last participated in Seven Quick Takes Friday!

Let me tell you.  I always have grand intentions of all the things I am going to share on the blog.  Half written posts, posts in my head, oodles of pictures taken with a specific post in mind and then...

Life happens and posts don't get written or finished.  And you never get to hear about that trip we took to Disney World almost two years ago.

So, for your reading enjoyment, here are seven quick blog posts I have been planning on writing.

1.  The Princess gets glasses.

In hindsight I should have probably realized she needed them.  She would get so upset when doing her school work that her letters looked wiggly.  I thought she was just being a perfectionist.  That was only part of it though.  Turns out wiggly meant blurry.  Go figure. 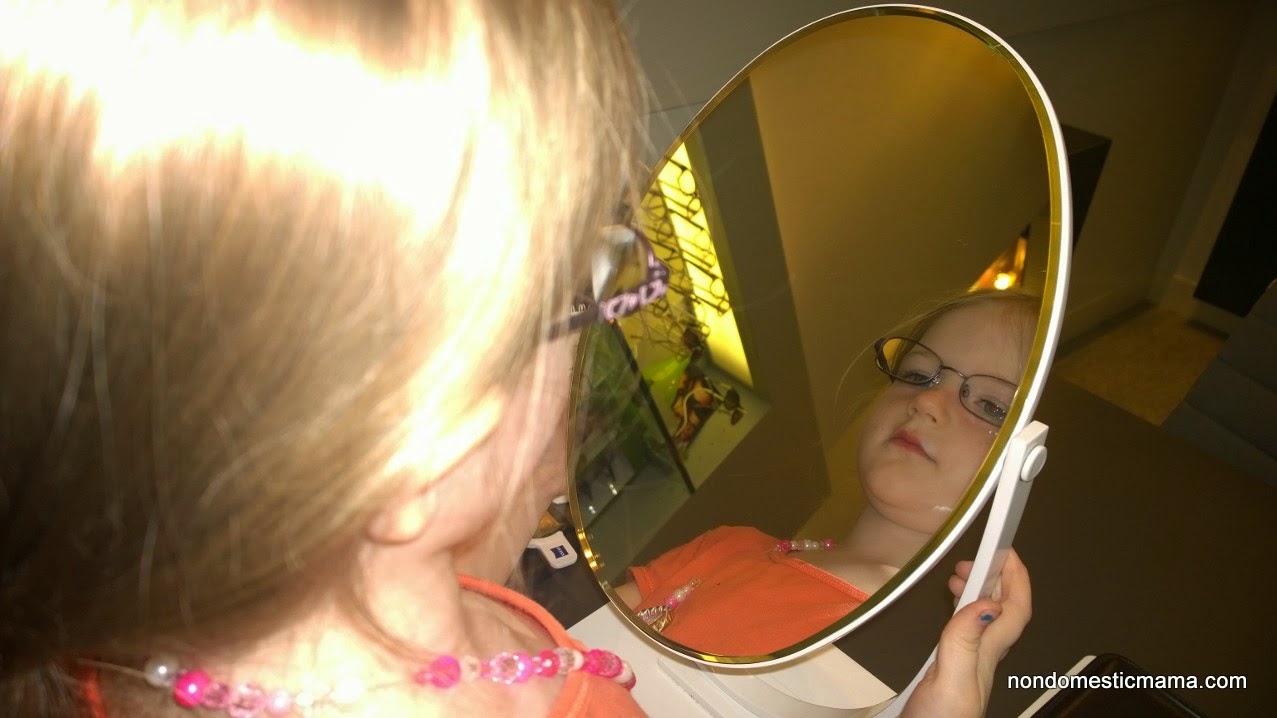 I got glasses too.  Not that I really needed them.  My prescription is the lowest one.  But I thought it would encourage her.  Good thing I don't actually need them because I have already managed to lose them.  Which totally makes all my lectures to her about taking care of her glasses and not losing them, a bit hypocritical. 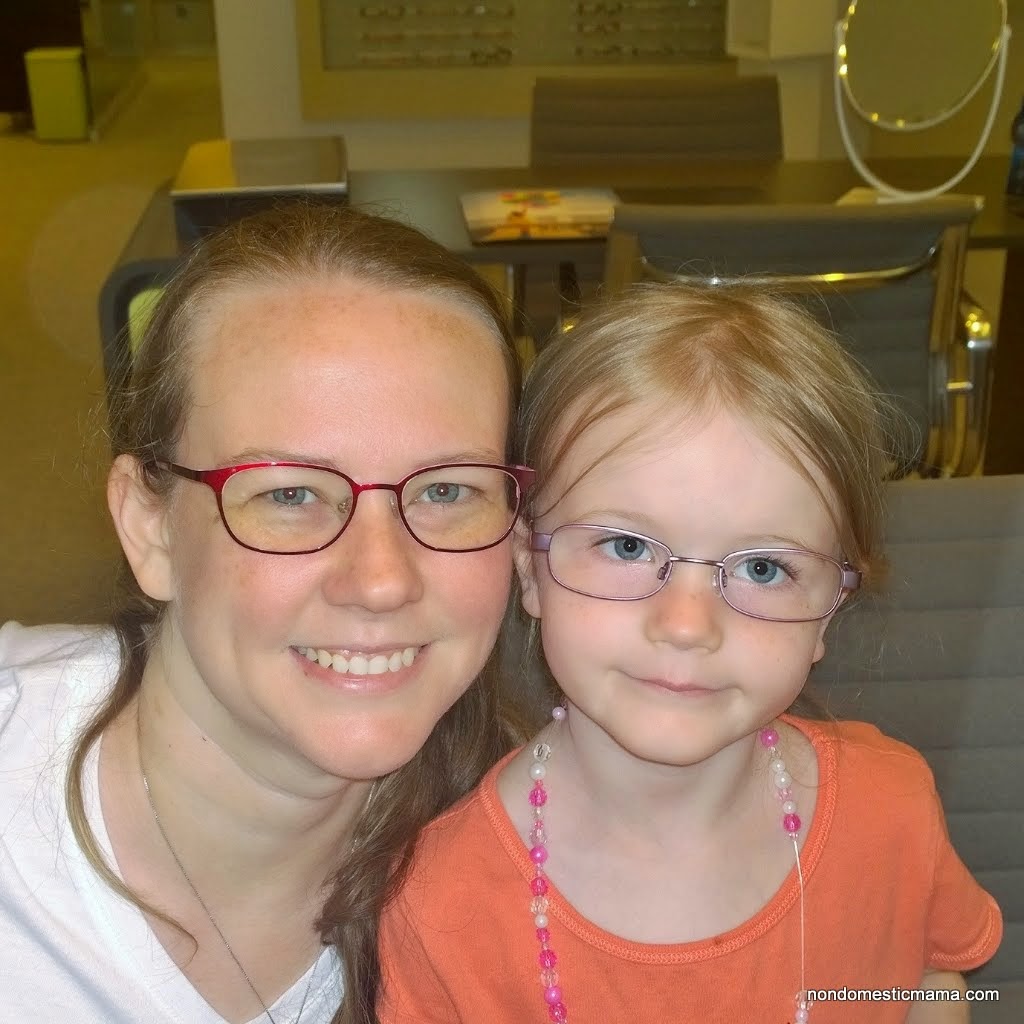 2.  The Princess gets her first haircut.

Almost 6 and she had never had a haircut.  Her hair was getting so long.  And difficult to manage.  And it was beginning to become a bit of a sanitation issue in the bathroom.  So I was really ready for her to cut it.  But she wasn't so sure.  And I remember being little and wanting long hair so badly.  I figure kids don't get to make a ton of their own decisions.  Hair is such a personal thing.  What harm does it do to let them do whatever they want with it?  Grow it long, cut it all off, dye it a crazy color, shave half of it.  It grows back.  If my kids are going to do anything crazy to their bodies, I want it to be their hair!


Finally while we were on vacation in San Antonio, visiting my family, we went to eat and noticed a kids haircut place in the same shopping center.  Sharkey's Cuts for Kids

I asked her if she wanted to give it a try.  She wasn't sure.  She seemed to like the idea of short hair but was a bit fearful of the process.  So we looked up the place online and saw they had a first haircut package that included nail painting.  She was excited about the idea but still a bit unsure.  I convinced her to go in and take a look around.  She agreed.  Once we got there the staff was amazing with her.  Her hairdresser did a great job of calming her and explaining everything to her.  Before she knew it she was getting her haircut.  She even got to pick her "flavor" shampoo.  She picked chocolate.  Chocolate shampoo!  She decided to sit in a race car chair and watch a show while she had her haircut.  Finished off with a cute butterfly clip.  Then on to the nail painting.  She got to pick her colors and her new look was finished off with a sparkly ring. 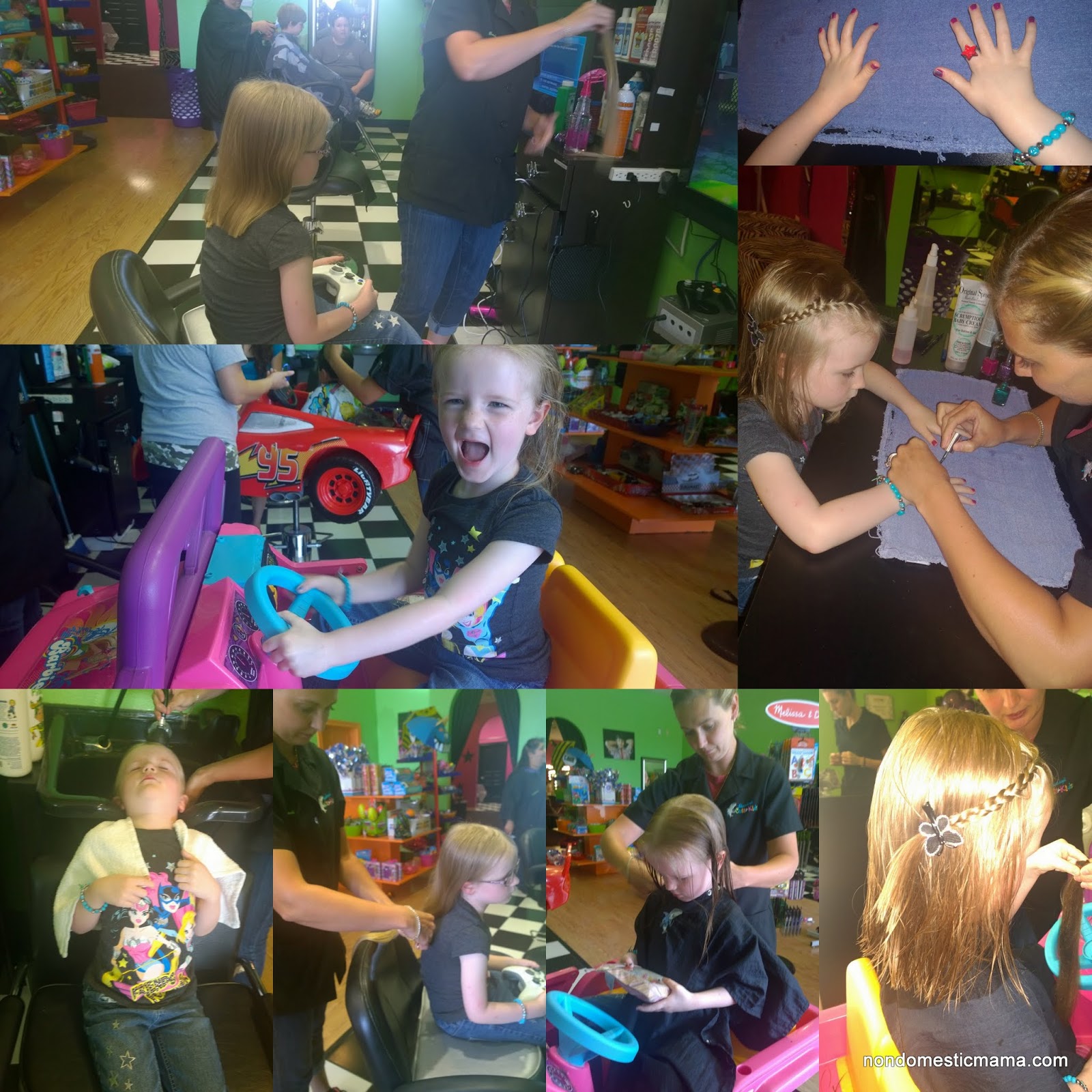 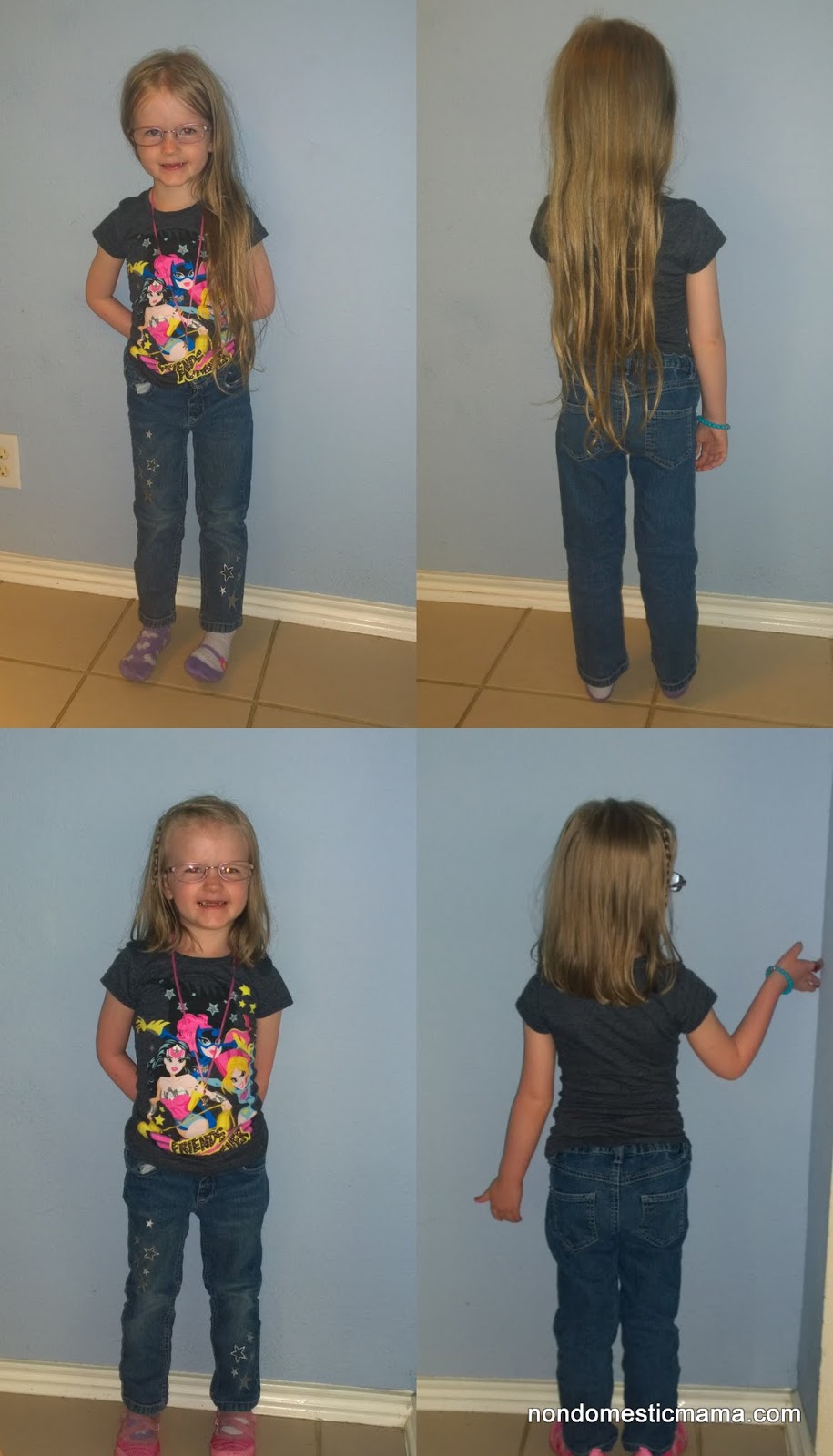 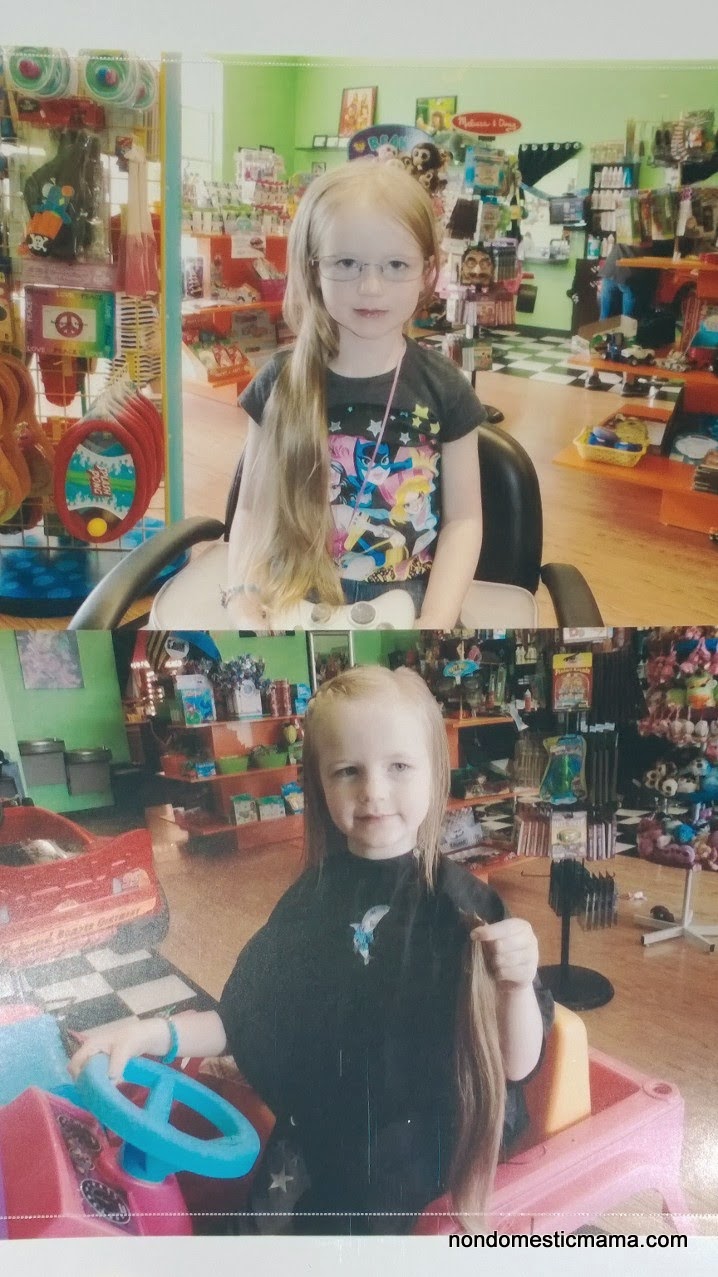 I almost didn't go when I found out that Dwija couldn't make it.  I wouldn't really know anyone there! Who would I follow around all weekend??  But I summoned up the courage and went to the Edel Gathering 2014 and had a blast.  I acted like a serious stalker and hung out with all the cool kids.  They were totally wondering why I kept following them around the whole weekend but were too nice to say anything like, "Get away from me you freak."

I stayed in the Penthouse of the Omni hotel with some seriously awesome ladies.  The Penthouse!  Special elevator and all.  Ruined me for all other hotel rooms forever.
The Penthouse Crew (most of us)
Got to finally meet Cari of Clan Donaldson and Kelly of This Ain't the Lyceum. 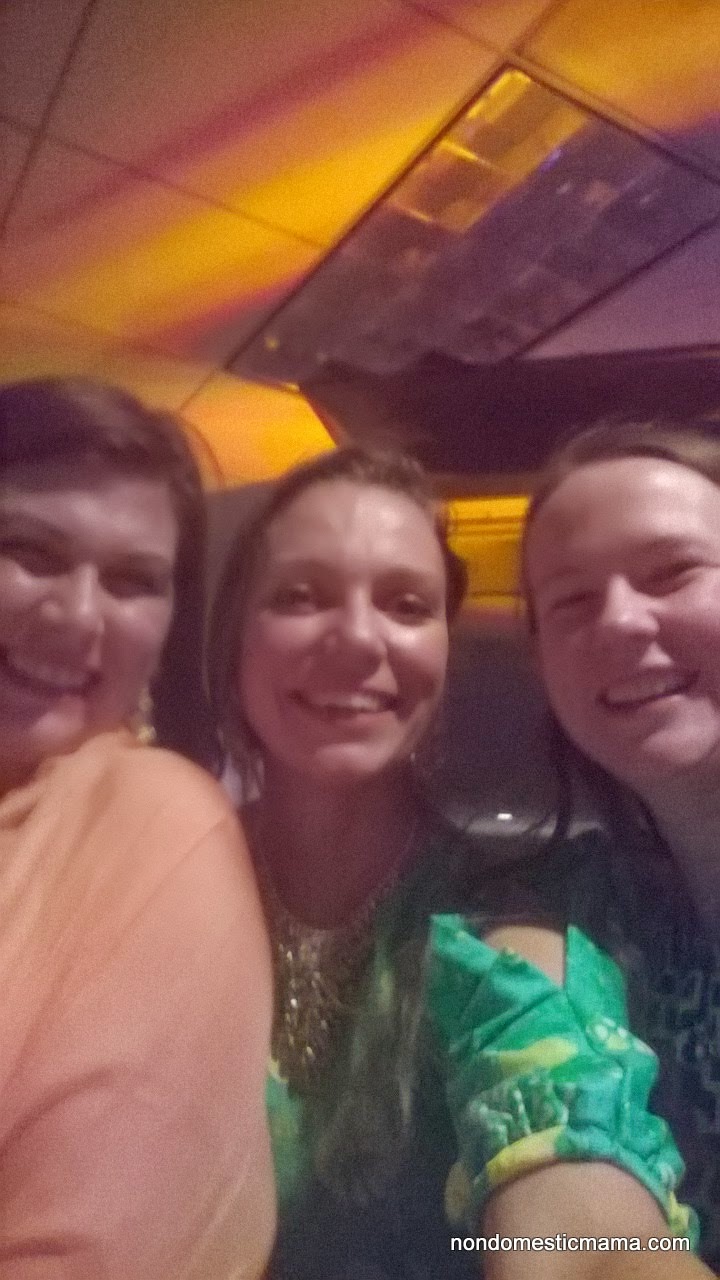 And pretty much glued myself to poor Cari's side most of the weekend.

Crashed Hung out at a hotel room champagne party until the wee hours with all the greats including Jenn Fulwiler and Hallie Lord.

AND Jenn Fulwiler called me by name.  She knew my name!!!!  Is what I thought to myself before I realized I was wearing a name tag.  Still totally cool.

Bought this gorgeous rosary bracelet from one of my awesome Penthouse Crew roomies, Shannon of Organic Mama's Shop. 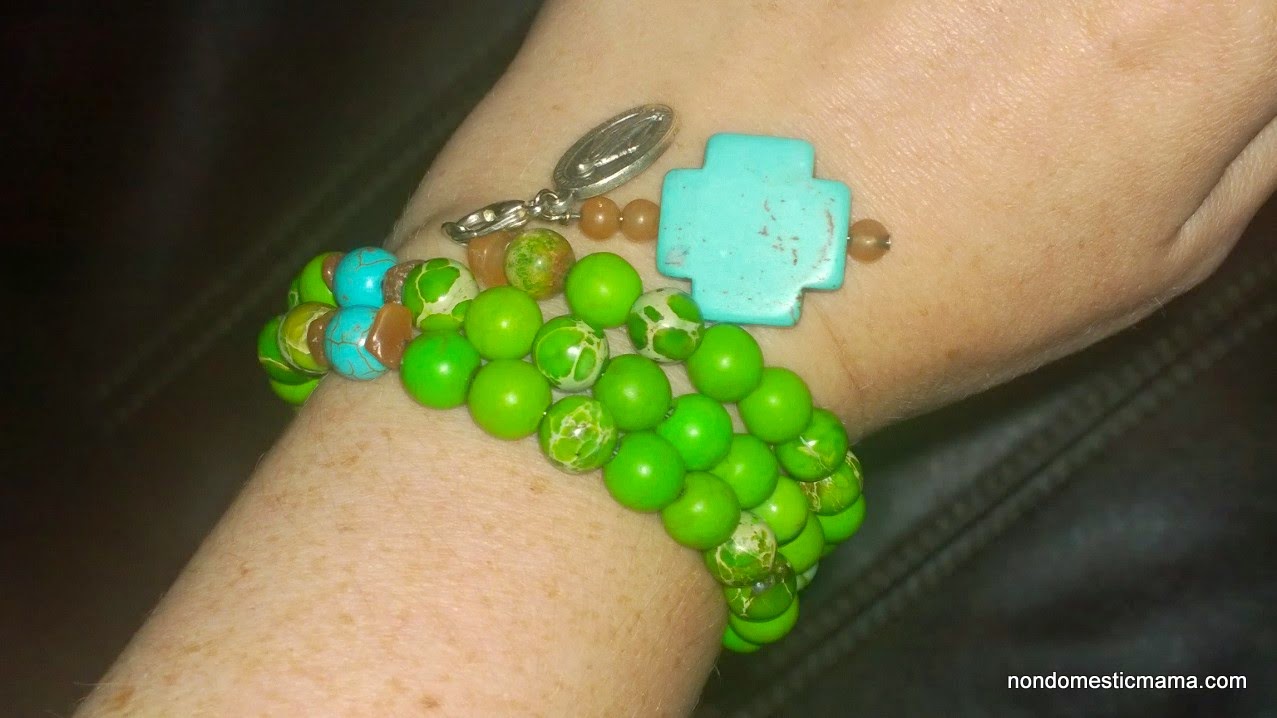 As it turns out, it's the same color as the one Cari, Hallie and Shannon wear.  Yet again, I somehow find myself in the company of the cool kids.

But who am I kidding.  Everyone at Edel was cool!
4.  The Garden Update

While I was away at Edel and San Antonio, all my kitchen windowsill plants died.  The guaranteed to grow seeds I planted in my outside flower beds did not grow.
With one exception.  The Caladiums grew.  Boy did they ever grow.  They are glorious. 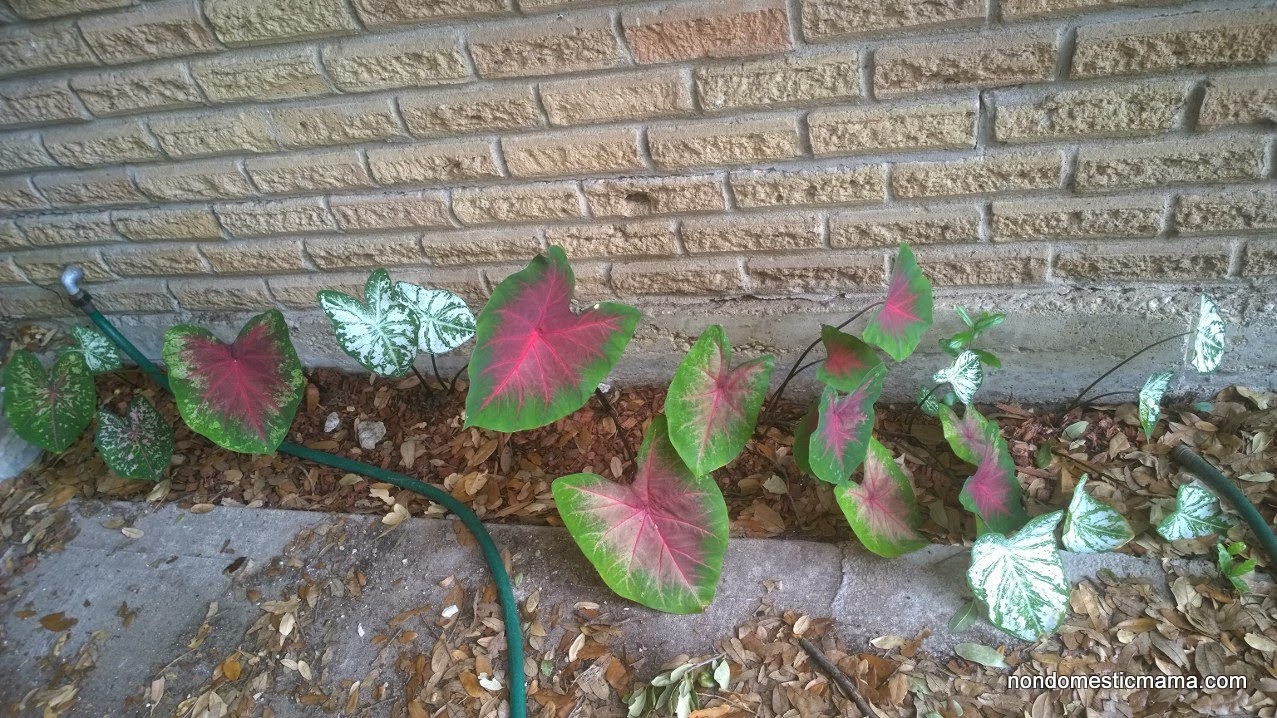 My new plan is to pick one plant a year and not to buy any more seeds.  I will buy a already grown plant and transplant it into my garden.  Hopefully I can keep one plant a year alive.  We shall see.  Otherwise I will just plant Caladiums everywhere.  Or retire from gardening completely.  I'm ok with that.

I tried the Cayenne paint color I was considering and liked it even less than the original orange. 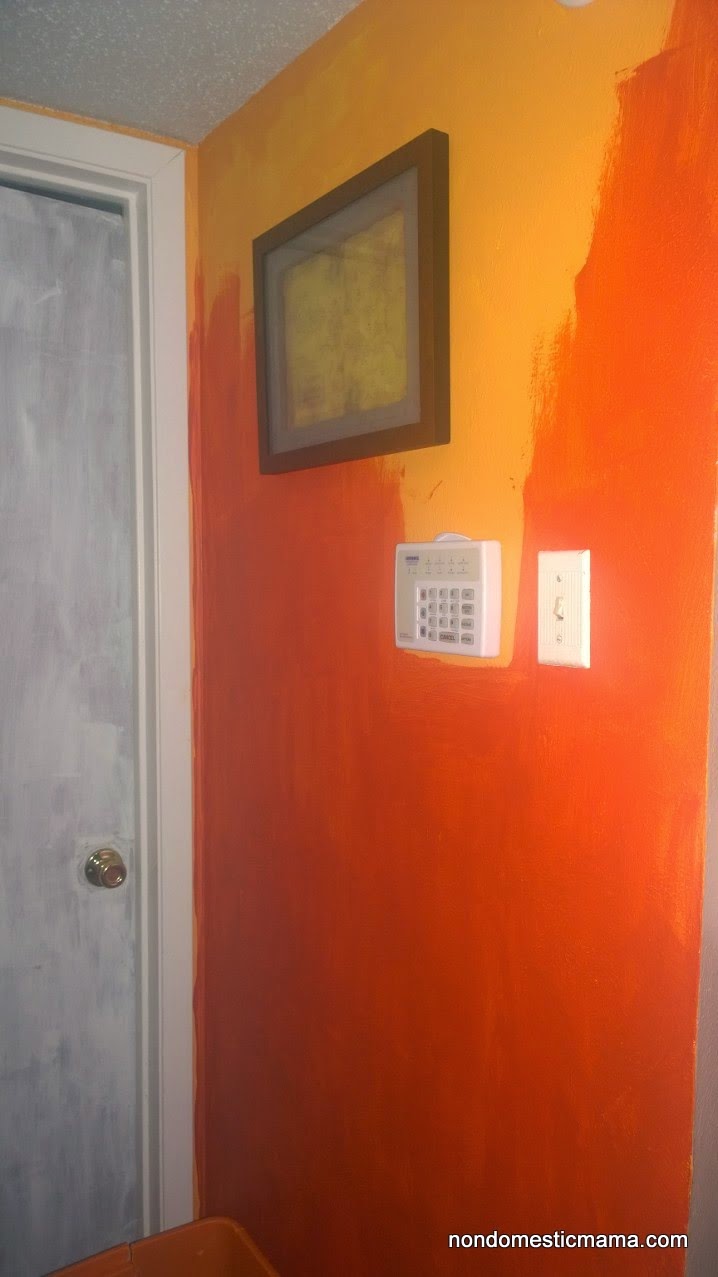 After living with the orange for quite awhile and starting to get used to it, I realized it wasn't actually the orange wall that I was hating.  It was the orangy brown doors against the orange wall. 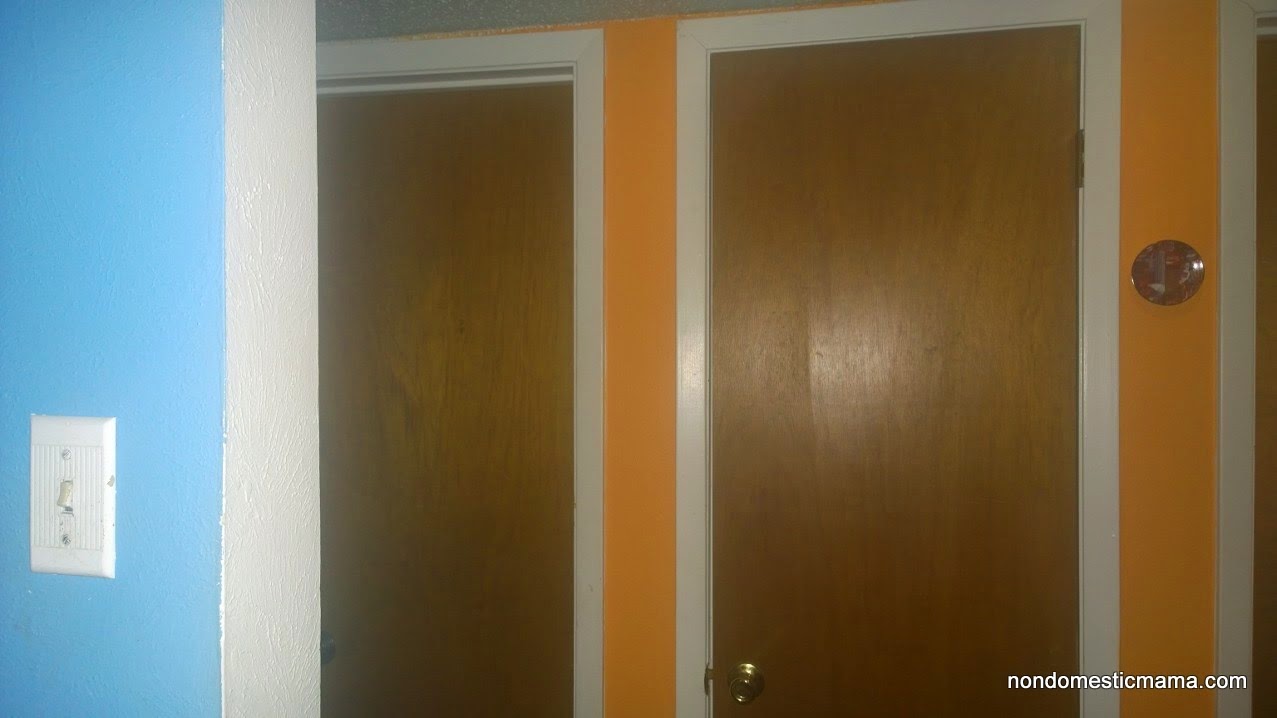 Not a problem because I have been planning on painting those ugly doors anyway.  I have rethought the purple since I realized purple against orange might look a bit too Halloweeny.  Instead I would like to paint them black.  Then I primed one of the doors and loved how the white looked (I do so love bright white against saturated colors) so we will see.  Let's be honest.  Anything is an improvement for those doors. 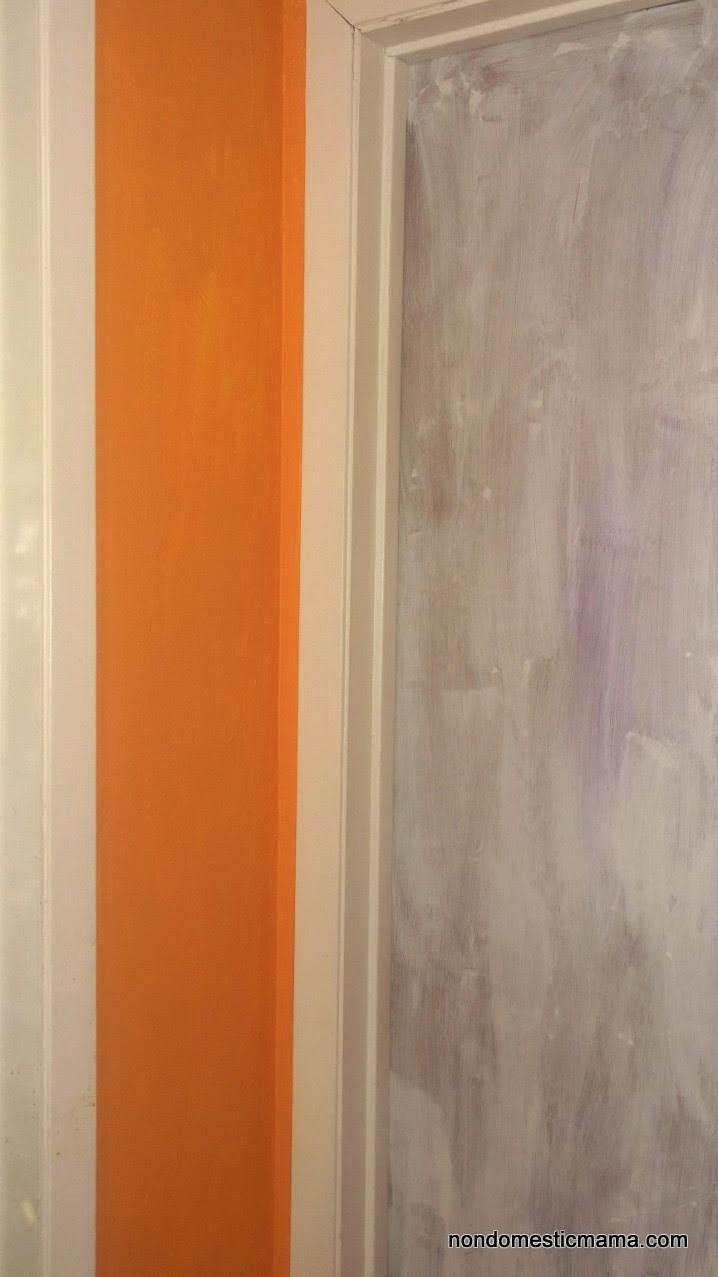 Either way, it will look way better.  And my husband actually told me he likes the lighter orange (as I was painting over it with the darker orange) which is pretty much a miracle.

Some friends of mine had a baby.  Then they had to return to work.  And since they weren't going to be using him during the day anyway, they were generous enough to let us borrow him while they work.  How awesome is that?  Let me tell you folks.  This is the life.  All the fun of playing with the baby all day and then we get to send him home and sleep all night.  Plus I have somewhat bigger kids now to help me with all the actual work.  They love to play with him and keep him entertained.  The Princess loves to feed him.  The Peanut loves to read to him.  They keep a constant eye on him.  It's a good thing his mother doesn't know how little actual work I do caring for her child!  The Princess has even declared that she will teach him to clap and then potty train him.  He isn't quite a year old but she is determined.  (Just to clarify, I do change the diapers.)  He is such a sweetie.  The happiest baby alive.  Even when he cries, which is rare, he will periodically stop and grin from ear to ear and then go back to crying.  As if to say, "I really want to be happy, if you could just take care of this one problem for me I can be my happy self again."  And he does.  The minute he is fed or changed or comforted he is back to laughing and babbling away.  The kids have dubbed him Mr. Cool.  I opted to use that nickname over my husband's affectionate title "Mr. Stinks AKA Baby Stinks."  I assure the nickname is a clear sign of affection.  Just ask "Baby Butt-Cheeks."  I don't have his parent's permission to plaster pictures of him all over the internet but conveniently his mom has already done that for me so feel free to look at all the sweetness and be a little jealous that I get to hang out with that cutie almost every day.

Totally jumped off a 40 ft platform into an airbag for a reality TV show.  All to raise money and awareness for Girl Power 2 Cure.  An amazing cause dear to my heart because of a beautiful, sweet, amazing girl named Juliana.  Trust me, it takes a pretty amazing person to convince me to jump off a perfectly good platform.  (Ok, the platform was totally scary.)  Juliana has Rett Syndrome.  You can read more about Juliana and Rett Syndrome at her Girl Power 2 Cure page and be sure to check out her Mom's blog. 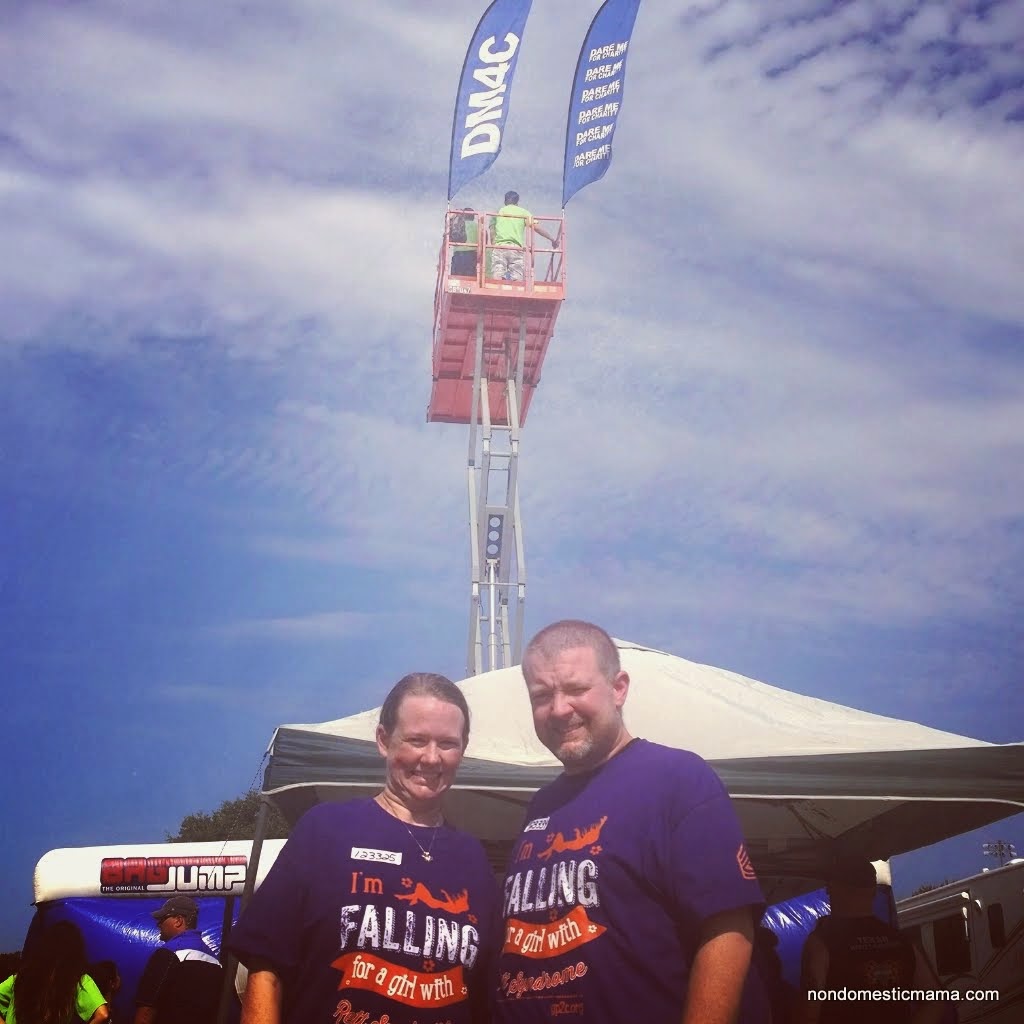 I jumped and survived but it is definitely something I won't be doing again!!  About the only thing that got me off the platform (aside from the fact that I had convinced Mr. Cool's mom to join us and she had already jumped, Juliana's dad was right behind me and I couldn't let him down right to his face and of course sweet Juliana herself) was the fact that it shook violently every time someone jumped off.  I was more scared of staying on the platform than I was jumping off.  I changed my mind about that the second I cleared the platform.  So, keep an eye out for Dare Me for Charity when it airs and you may get the chance to see me ever so eloquently say "That is the worst thing I have ever done" immediately following my jump.  Or better yet I won't even make the cut and you can see far greater and more interesting people and learn about some great charities.

And now that you have endured reading those not so quick takes, you are all caught up on my ever so exciting life and I am all out of things to think about blogging about!

It seems appropriate that I didn't manage to finish this in time to actually post it on Friday!

*This post may contain affiliate ads.  Read my full disclosure here.
Posted by NonDomesticMama at 1:17 PM