It seems I have been inducted into the Mommy Blog Mafia.

Did you say T-Shirts?

Obviously the bad clipart image should be replaced by a fisher cat but I didn't have any pictures of fisher cats.  Cari should really send me one so I can remedy that.

Oh, and I am supposed to answer some questions.

Stealing the explanation from Cari who copied it from Paula.

"According to the paragraph I've cut and pasted from Paula's post, "The Liebster Award originated from a German blogger who wanted to recognize her fellow bloggers with fewer than 200 followers.  Liebster means "dearest" in German."
And, because I love me a lazy Google search, I found this blogger with more ambition than I have tracked down the award to its apparent source.  Like a Snopes for blog awards.

Now for the questions and answers:"
1. When you were little, who did you want to marry?
Oh goodness.  Who didn't I want to marry?  I always had some sort of crush as far back as I can remember.  Except for the times I decided I was going to be a nun.  A nun astronaut.  Hmmm.  Probably the first person I actually remember wanting to marry was Joseph.  How old was I?  8?  He was four years older than me.  I thought that was just the right age difference.  Ironically my husband is four years older than me so I must have been on to something.  Joseph was really more of an older brother figure.  I remember him teaching me how to roller-skate.  Most of the boys in the neighborhood liked hanging out at our house because we had a "TI" with all the best video games.  Like Burger Time.

2. What's the most out-of-character piece of clothing you own?
Strangely enough probably a plain white shirt.  Which I can never bring myself to wear.  Because I am clumsy and always spill food on myself so I know I will ruin it the first time I wear it.  And also because I love color so much.  Seriously.  Love color.  I love spring fashions because they are so colorful.  I just want to shop in the spring and wear all that year round.  I will pretty much buy anything neon.  Anything.  In highschool I dressed in one neon color from head to toe.  Matching neon orange shirt, shorts, skirt, socks, shoes AND shoelaces.  I had a color selected for every year.  Hot pink started it all at 13.  14 was orange.  15 electric blue.  16 green because it was my favorite color and seemed appropriate for sweet 16.  17 yellow.  18 purple.  And 19 was that bright orange/red color.  Sadly neon went out of fashion and the pink and orange outfits were the only ones I managed in entirety.  I did have the blue and yellow shirts.

Or maybe a scarf.  I like the idea of scarfs but can never figure out how to wear them.

Or sunglasses because I can't wear them.  They give me a headache.

Or anything that is actually fashionable.  If I actually own anything like that.

3. Best piece of advice your mom or dad ever gave you?
Not to marry Joseph.  ;)
4. Sandals that go between your toes: are they called "Flip-flops" or "thongs"?
Flip-flops!  Please, for all the goodness in this world, NEVER call them thongs!  I did call the flip flop socks that were popular when I was in Japan "thong socks" because they looked like tiny thongs (underwear) for your feet.  Never understood those and I am a big sock fan.  (Wild colorful socks of course.)

5. In a matchup between a fisher cat and a medium-sized squid, who would win and why?
I am probably going to say squid. The fisher cat looks meaner but I have a good feeling that squid would just sneak up on the fisher cat and swallow him whole before he even knew what hit him.

9. Chocolate chip cookies- with nuts or without?
Why?  Why??  Why would you ruin perfectly good chocolate chip cookies by putting in nuts????????  And while we are on that subject, what is with putting nuts in brownies?  And ICE CREAM?!?!?  Are you people NUTS?

10. Why won't my kids go to sleep already?
I am so glad you asked. I finally solved that mystery last night. It is because our children think we would look hilarious bald.  All we need to do to get them to sleep, is tear all our hair out by the roots.  Then they will finally be satisfied and will sleep like little angels.

Now I am supposed to tell you 5 things about me that you don't already know.  I figured I would just totally geek you out and tell you things like these.

2. My husband and I had a discussion about bad horror movies on one of our first dates.  I mentioned that some horror movies are good because they are so bad.  Like Evil Dead.  He stiffened and asked me what I meant.  I clarified that I love the Evil Dead movies especially Evil Dead II.  I swear that is the moment we fell in love.  He told me later, he was wondering if he would need to run home and hide his giant chainsaw wielding Ash action figure which was on display in his living room. 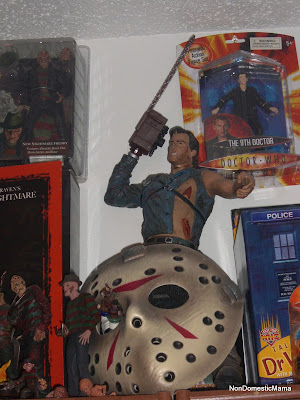 3. I did not own a pair of jeans until I was 15.  Before that I wore skirts (mostly of the blue jean variety) and shorts/culottes.  Yes, that neon orange outfit included orange culottes.  AKA the homeschool uniform.  Oh, I also wore a uniform because my mom thought if we wore uniforms people wouldn't ask us why we weren't in school.  People still asked why we weren't in school and then they asked why we wore a uniform if we didn't go to school.

4.  I have always listened to "Contemporary Christian" music.  I even had a subscription to CCM magazine until they stopped printing a magazine.  When I got mad at my dad I would go to my room and blast my DC Talk rap album with the bass turned all the way up.  I knew he hated it.  But all he could really say was to turn it down.  After all, it was Christian music!  I would still like to locate my missing Billy Crocket, Any Starlight Night and Amy Grant, House of Love t-shirts.  It's entirely possible I wore them so much that they disintegrated.  However, I suspect foul play.

5.  I am never happier than when I am doing something that silly, somewhat childish, and totally worthless.  The bigger the time waster, the better.  See Mommy Blog Mafia t-shirts.  The entire time I was making them I was giddy.  Giddy!  Haven't been that giddy since I made the I HEART DWEEJ Fan Club t-shirt.

Now I am supposed to put a bunch of people on the spot tag people.  Which is a bit hard because the blogger who sometimes reads my blog tagged me...

Some of them have more than 200 followers...

Oh, I guess I have to make up questions too?

1.  If you could have any job for a day, unpaid, what would it be and why?
2.  Are you prepared for the Zombie Apocalypse?
3.  Which Doctor is your favorite?
4.  Christian Bale is the best Batman.  Explain why.
5.  What do you do for fun?
6.  What is the best cleaning or organizing tip you have ever put into practice?
7.  What is the worst advice you were ever given?
8.  What is your biggest pet peeve?
9.  What is your favorite book?
10.  3D movies?  Fan or no and why?

*This post may contain affiliate ads.  Read my full disclosure here.
Posted by NonDomesticMama at 7:04 PM

Email ThisBlogThis!Share to TwitterShare to FacebookShare to Pinterest
Labels: I'm a Geek, Me, Randomness that nobody really wants to read but I'm still writing it
Newer Post Older Post Home