It got cold this morning.  Like, stay in bed, huddled under the comforter, with only your ice cube nose sticking out for air, cold.

Nobody explained this concept to my kids.

So, I braved the cold.

Now, I have to admit, the cold is a welcome change after a long hot summer.  Long and HOT.

Our electric bill will finally drop to, like, a tenth the price.  Which is happening in the nick of time or possibly slightly after the nick.

Needless to say it is so nice to be cold.  Really.  Not going to complain...

Other than the electric bill the size of Texas, I would much rather 100+ degree heat over cold.  Seriously.  Yes, I say the same thing when it's 115 degrees out.  I really do.

That is why, on the first day of the great icy cold, except not actually icy because it's not cold enough, even though it feels like it is...

I turned on the heat.

And I can't function in anything lower than 70.

What?  That's why I live in Texas people!

Also the rain is back.  We had a huge house rattling thunderstorm the other night and it was glorious!

About a month ago we had our first rain since... last year or something.

It rained about 12 drops total.

My daughter immediately ran to the closet and pulled out her "brella" to go out and play in the rain.  The funny thing is she was given the umbrella (hand me down from her cousin) at the beginning of the summer.  She has never used it in the rain before.  In fact she has never really used any umbrella in the rain before.  Plus she is only three so I can't imagine she would really remember someone else using an umbrella before.  So, I was pretty impressed that she knew exactly what to do. 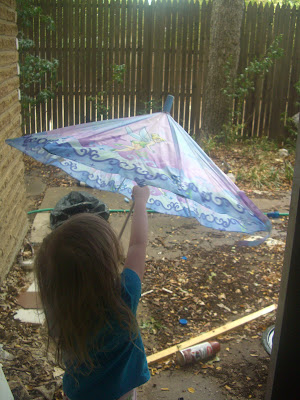 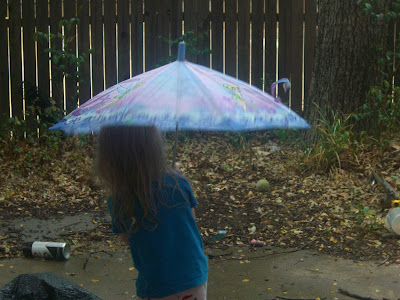 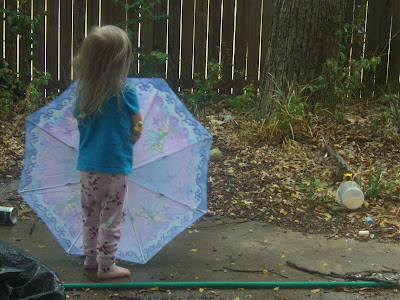 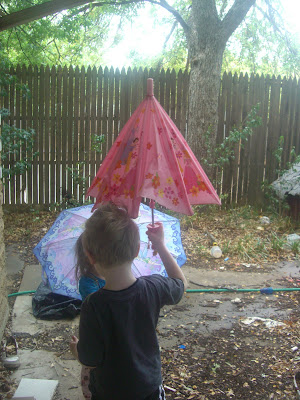 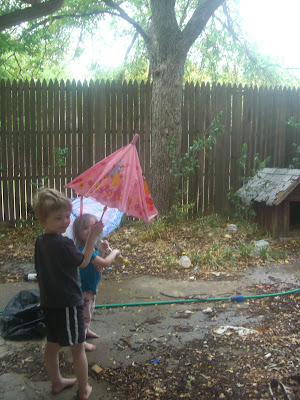 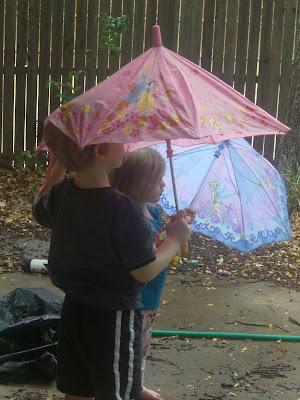 And I pretty much just added that last part so I could put in the pictures.  Because my kids are cute.  And I figured you would rather look at them than a picture of my thermostat.

By the way, my son actually has a Spiderman umbrella but it was in the car so he borrowed my daughter's other "brella."

Yes, my backyard is messy too.  I know you aren't surprised.

Posted by NonDomesticMama at 6:27 PM